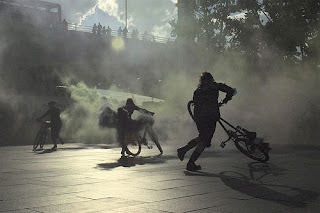 Brent Cyclists have come out in strong opposition to the traffic plans for Barnet Council's proposed Brent Cross Cricklewood development.

They say, "We object that the plans for cyclists along the A5, south and northbound, would create new and significant hazards on a route which is already difficult to negotiate.

Southbound it would be impossible to travel across the North Circular without a massive detour and negotiation of ramps. The only direct alternative for cyclists will be to use the flyover. Few cyclists will want to risk that; to get on and off the flyover you have to ride across two lanes of fast traffic on slip roads at each end. This will significantly increase the chances of casualties, and possibly deaths, among cyclists. The A5 is an ancient route that the public has been able to traverse in a straight line for close on 2000 years. These plans will remove this right from cyclists and pedestrians. They also contradict the Mayor's plans for 'cycle superhighways', which are supposed to be 'safe, direct, continuous, visible, comfortable and informative'. "
Posted by Martin Francis at 12:19:00