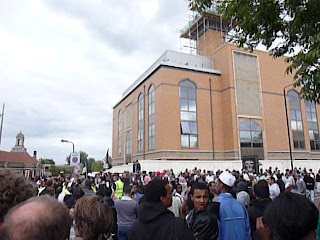 It wasn't a riot, as the Guardian website claimed, but a good humoured, lively and sometimes excitable demonstration of community solidarity against right-wing extremists which succeeded in keeping them off Harrow streets and well away from the Harrow Mosque.

The few stray rightists who did turn up were chased away by local youngsters who soon returned to the main demonstration. There were reports that Stop the Islamisation of Europe (SIOE) cancelled their demonstration when the police informed them of the scale of the counter-demonstration. 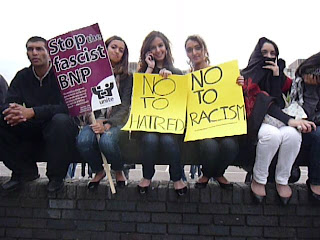 Today's events showed what can be done when a whole diverse community unites against those who seek to divide it. Given the SIOE's (and their supporters in the English Defence League and British Defence League) extreme provocation in organising the anti-Islam protest on the anniversary of 9/11, during Ramadan and after Friday Prayers, the solidarity vigil was remarkably restrained.

HARROW, UNITED, REFUSED TO BE DIVIDED