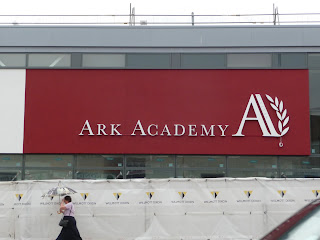 In what he described as his 'swan song', John Christie outgoing director of Brent Children and Families, warned governors at the Brent Governors Conference to think very carefully about making a decision on their schools becoming academies - despite the government's letter to headteacher of 'oustanding ' schools which enables them to change status by September this year.

Christie said that they should take time to assess the impact on other schools and the services provided centrally by the local authority; to whom schools would be accountable; and how a decision to go for academy status would fit in with provision of the National Curriculum. Although there is no statutory responsibility to do so, he said schools shoudl consult with staff, pupils, parents and the local community. He said there was insufficient information available at present and that issues such as where accountability rests (local authority, national government, Ofsted) need to be thought through. Christie read a letter from Michael Gove extolling the virtues of local authorities and their role in improving schools and contrasted that with his rhetoric of 'freedom from local authority control'. He said press reports on the financial advantages of academy status, with figures quoted of up to 10% extra funding, were only speculation, but such a shift would have a significant impact on central services.

On 'free schools', with the government encouraging new providers, he commented that a Brent survey of local residents had indicated strong support for schools to be provided by the local authority rather than charities, religious groups or businesses. He welcomed the concept of a pupil premium, with extra funds going to disadvantaged pupils, and said Brent should benefit. In the absence of a White Paper on the proposed policies he urged governors to respond to Michael Gove's letter inviting views.

John Christie was challenged from the floor by  Reg Colwill, Conservative member of the previous Council Executive, on why he had come to the Executive and recommended the Wembley ARK Academy, when he had just listed the disadvantages. He had never advised the Council against academies. When Christie struggled to respond Bob Wharton, Liberal Democrat member of the previous Lib Dem-Conservative adminstration and responsible for Children and Families, jumped in to say it was the only way to get £35m in funding for a new school in Brent. Unfortunately the Conference was closed for lunch at that point and the debate was left in mid-air.

The issue of academies had been in the foreground of earlier discussions with Cllr Mary Arnold, lead member on Children and Families of the new Labour Council, saying at worst the policy was a threat to central services and all the support they provided to schools.  Denise Burke, interim head of Brent Integrated and Extended Services, who gave a keynote speech was asked whether schools should go for academy status, and took her official Brent hat off to say as Chair of Governors of Miles Coverdale Primary in Shepherds Bush that schools 'shouldn't go near it', winning a warm round of applause.

Alan Carter, of the Campaign for the Advancement of State Education, said he was opposed to academies because of their terms of governance which were unacountable and undemocratic. He said that previously academies had one merit, that they were targeted at helping deprived pupils and unsuccessful schools, but this had been transmogrified into academy status for the most successful schools, This would result in a 'grab for cash' which would work entirely against equality. He offered a CASE speaker to governing bodies who would give an objective presentation on the issue.

One significant issue that did not come out during the sessions was that Michael Goves had written to headteachers with the offer of academy status, by-passing governing bodies who are statutorily responsible for the strategic directioon of their schools. If change of status is not a strategic issue what is? This betrayed at best an ignorance of the present democratic arrangements, and at worst a contempt for them. Peter Newsam, ex-leader of the Inner London Authority has recently suggested that academies and free schools should rightly be called 'Goverment Schools'. Because of their funding arrangements they will be directly under the control of the government.

I am very grateful to Martin for giving this information. Of course Director's of Education for Schools and Families and local councils like Brent were put in a very difficult position by a blackmailing Labour central government who were indicating that the only way of getting any money for building new schools was to go down the academy route. However, by complying with this and not siding with the resistance, in Brent's case to the ARK hedgefund speculators proposal for an academy on the Wembley Sports ground and the (financial dodgy dealers) Edutrust/E-ACT proposals to turn JKB and JKG into academies, they helped with the Labour government's preparation for this onslaught by the Conservative LibDem coalition. As Fiona Millar said recently “Remember the “direction of travel” that was so hotly contested during the passage of the 2006 Education and Inspections Act? Well, this is where it was leading. In words and deeds, my own party paved the way for the sort of fragmented free-for-all we are about to witness.”
I am very pleased to hear that Mary Arnold has personally indicated her position to these proposals which are, as everyone is increasingly realising, nothing less than the privatisation of the management of the entire state education system. I also welcome John Christie's comments which as he is retiring he may have felt freer to make. We need a totally united front of everyone in Brent (as we do in the country) who is against these proposals to pull together to defeat them.
Hank Roberts
ATL and NUT Secretary

ARK is most certainly the errant angel. Paul Fryer, funded by Michael Platt (trustee of ARK) produces the sculpture of Lucifer:

His largest solo exhibition, Let There Be More Light, has just opened at Holy Trinity Church where celestial sculptures have eerily taken up residence. The most arresting figure is that of Lucifer, tangled in telegraph wires – a haunting depiction of the origins of execution by electric chair.

See the image gallery for these and more, all of which related to the 'John Adam Street Gang' of which ARK is a part at the URL attached.

There is another concern with the Brent Academy which is largely missed, the school is built on top of police anti terror cells.

I cannot for the life in me understand why this would even be contemplated let alone completed..