Save OUR College - Kilburn unites against closure 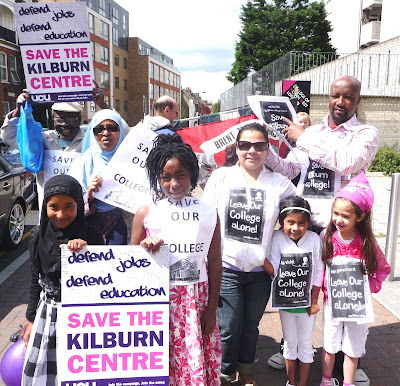 The community and the generations unite to save Kilburn Centre
A bustling Kilburn High Road, thick with Saturday traffic and shoppers, witnessed early resistance to the cuts when lecturers, students and their children, trades unionists, Brent Trades Council and local supporters marched to demonstrate against the closure of Kilburn Centre. The College of North West London is closing the £5.5m centre only three years after it opened in order to save money.  At the same time it has an unused building in Wembley Park worth £4m that it is refusing to sell off because it is waiting for the property market to recover.

Sarah Cox of Brent Trades Council, addressing the open air meeting in Kilburn Square rightly said that the CNWL should be educators, not property speculators. She emphasised the importance of the Centre as a local resource and the necessity for a building within easy walking distance for parents with young children.She remarked that the political parties had been vocal at the public meeting in support of the Centre during the General Election campaign but only the Green Party were present today.

Alf Filer of the UCU and Harrow College delivered a message of support and spoke about how the impact of cuts and recession had hit his own family. Hank Roberts of the NUT spoke about education cuts in general and called for direct action citing the occupation of Wembley Playing Fields in opposition to the building of the Wembley Academy.

Not speaking, but evident from the posters - and very welcome, was the support of the Kilburn Times for the battle to save the Centre.
Standing in for Pete Murry, ex-CNWL  lecturer and Secretary of the Green Party Trade Union Group, who had a meeting elsewhere, I pledged the support of Brent Green Party for the campaign.  I said that Further Education was particularly important to me because as an '11+ failure' who had left school at 16, attending FE evening classes in my 20s had enabled me to get the qualifications to enter teacher training.

Further Education is a lifeline, a second chance, and has the capacity to change lives. That is why we must defend it. At the same time at the other end of the age spectrum Children's Centres, which are geared to improving life chances in the early years, are facing an uncertain future. Funding is only guaranteed for one year and with 20 Centres on stream, Brent may be faced with mothballing new buildings.

These buildings in our borough have been paid for by our taxes. They are OUR buildings and as such rather than letting them be mothballed and useless, we should take them over for community use. I could have added that with the policy on so-called 'free schools' we should be wary that they might be the target for private companies or charities to set up their own schools, funded by us, but outside any democratic accountability.
If we are to fight climate change and create a low carbon economy, we need to invest in education and training. It will be a scandal if the people of Brent, with its high unemployment rate, should miss out on such opportunities.

Sign the Campaign Petition HERE   Contact the campaign to offer help at cnwlkilburn@googlemail.com
Posted by Martin Francis at 10:46:00