Brent's Director of Education to Retire

John Christie, Director of Brent Children and Families, has announced his imminent retirement a few days before he is due to address Brent Governors at their annual conference which is being held on Friday at the Wembley Plaza.  The theme of his address? 'The Future in Brent'.

Christie, who will retire from September 6th after 8 years in Brent, says that this is a good time for a new appointment with a new council, a new government, and new challenges. These will include redundancies and conditions of employment changes, which have already been set in motion by Christie in his department.  There will be intensive pressure on schools, including primaries, to seek academy status with the incentive of up to 10% increase in funding from monies that are presently withheld by the Council to provide central education support services. There will be a consequent loss of funding to non-academy schools and deterioration in support services. This will force schools to buy in support from the private sector.  In  addition cuts in  central government funding for particular programmes which went directly to schools will mean that schools will have to either end those programmes or pay for them from their depleted funds.

Christie started his career in Brent with a great deal of goodwill.  His quiet and friendly approach was in stark contrast to his abrasive and divisive predecessor. During the hiatus after the hung  election in 2006, when the political parties failed to negotiate a new administration and officers ran the council, he continued to push the previous Labour administration's academy policy. When the Liberal Democrats belatedly formed a coalition with the Conservatives, they were persuaded to ditch their opposition to the Wembley Academy that had formed part of their election manifesto, on the basis that there was no alternative. The Conservatives were opposed to an academy on the Wembley Playing Fields site, however their failure to secure a written 'double majority' agreement (a policy only goes forward if a majority of councillors in each of the coalition parties agree it) meant that the Lib Dems out-voted the Tories on academy policy, and anyway had the support of the Labour councillors on this particular policy. 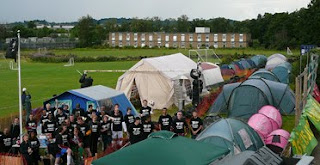 The decision to go ahead with the academy created a huge wave of opposition uniting local residents, trade unionists, Brent headteachers, Barry Gardiner MP and Bob Blackman, then leader of the Conservative group on the council and now a Tory MP.

Opposition was on varied grounds:
Objection in principle to the privatisation of state funded schooling, concern over the shady nature of the first sponsor, opposition to the loss of green space, concern over the impact on the local residential area, the possibility of conflicts between academy pupils and those from the nearby Preston Manor High School.  A constant theme, which continues, was the argument that a new secondary school was needed in South Brent, rather than the North.  As the planning process began the limited nature of the consultation also became an issue. Christie found himself faced with opposition at consultation meetings and the occupation of the playing fields by a Tent City (above).

Christie attempted to take on Hank Roberts, NUT and ATL activist, and one of the leaders of the Anti-Academy campaign threatening to end the agreement whereby the Authority paid for his cover whilst he was engaged in union duties. Eventually through a series of legal cases and with the Parks department taking over security at the playing field, campaigners were removed from the site and the council rushed through planning permission for a temporary primary school. 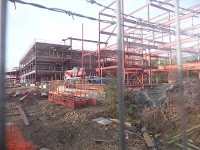 Planning permission for the permanent, all-though academy, now sponsored by ARK who are funded by a hedge fund speculator, followed. As building work began John Christie was faced with Hank Roberts on another front. Roberts whistle blew on financial mismanagement and alleged nepotism at his own school, Copland in Wembley, which led to suspensions, resignations and sackings. The situation raised serious issues about the role of the Brent Children and Families Department and the effectiveness of their monitoring of school financial management.

John Christie began as Director of Education in Brent but following the re-organisation of Children's Serrvices, which joined education and children's social work in one department, he became Director of Children and Families, taking on responsibility for children's social work, child protection, safeguarding and other similar areas. This was a huge extension of responsibility and the pressure on someone from the 'education side' must have been enormous. The Baby P case and the lessons to be learned from it loomed large in all local authorities and Christie was instrumental in introducing changes aimed at increasing the effectiveness of processes and multi-agency work in the borough.

Despite these difficulties Christie retains a considerable amount of goodwill and can point to many improvements in Children and Family services under his watch including the fact that Brent educational standards, as measured by examination results, are better than those of many similar authorities and a more stable and responsive approach to children's social needs.

Although policy is in theory made by councillors, the Director of Children and Families (or possibly Director of Education if Brent follows the Coalition example of separating the roles again) is extremely powerful and his or her educational philosophy and perspective on current educational issues vitally important. Will the  Labour Council appoint someone with the ability to stand up for children and schools, with an independent mind and the strength to resist government pressure; or will they appoint someone who will manage 'efficiency savings' and implement poorly thought out 'innovations' and in the process oversee the deterioration of Brent's education system?
Posted by Martin Francis at 23:20:00

Hi,
I am surprised there is no mention of "wonderful" work Mr. Christie did in relation to Kilburn Park Primary School.
His ill-timed intervention, removal of management and skilled manipulation of staff were a stroke of a genious, self-serving in the name of common good and at the exspence of children. Happy to see him go.

Thank you anonymous...He threw enough muck and used the financial muscle of Brent Council to get his own way.It took 13 years of building to get to being a top 10 school..In one year he destroyed it.He's best forgotten and consigned to the dungheap of history.
With love to the wonderful people of South kilburn....Michael Condon