Defending the NHS in Brent - May a Month of Action 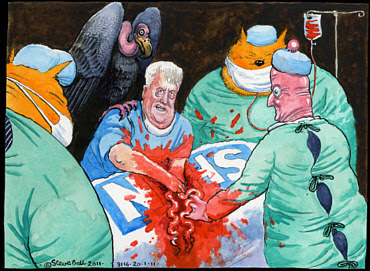 The 'thinking space' on NHS 'reforms' (privatisation) has provided an opportunity for local campaigning organisations to call a public meeting to enable local people to hear the views of GP, health workers, service users and MPs on the proposals.

The following extract from a blog by Russell Razzaque on the Independent website LINK sets out the reality of the reforms:


Working within the NHS today, I have witnessed first hand the sheer confusion and, in some quarters, borderline panic, that has ensued as a result of the governments recent announcements. PCTs were established as the purchasers in the system. These are massive strategic planning decisions that involve many billions of pounds. Overnight, the government plan to remove all of them, and hand the totality of their powers over to GPs. They have not described how GPs – with no training in accounting or management – can take up this role. They have not provided guidance as to how GPs might pool together to achieve this. As the so called “GP consortia” can be as large or as small as anyone chooses, a chaotic bout of “run around” has ensued with GPs trying to partner up with each other across boroughs and local boundaries, unsure which way to go.

The PCTs have already started to dismantle and in London, staff with no future are haemorrhaging in droves, leaving a skeletal operation alone to determine the allocation of billions worth of spending. The Chair of The Royal College of GPs has described the proposed changes as the end of the NHS as we know it. The BMA, the Royal College of Nursing and several of the specialist medical Royal Colleges have spoken out against it. Calls to phase it in and start with a series of gradually building pilots have fallen on deaf ears. No one is sure how it will work or how adversely it will effect patient care. The very people who will be tasked with implementing such rapid change are already utterly perplexed by it. That is because they are supposed to be. It is an engineered shock. All the while, waiting in the wings, with a metaphorical defibrillator, will be the private sector. The large American insurance based corporations are eyeing the soon to explode UK healthcare market with salivating mouths. The vacuum that is being created, is being created for them. They will be hired to do the commissioning by and instead of GPs who are, through no fault of their own, clearly untrained and unable to do it. And it won’t be long thereafter before these same private organisations start hiring themselves as providers instead of NHS Trusts, many of which will ultimately go bust.

The government are, in fact, proposing to rig the market in their favour by requiring every single contract to go for competitive tendering. This means that, even if there is a high performing Trust with which the local population is happy, they will still have to submit themselves for retendering to the commissioners on a regular basis who will then be legally obliged to consider private sector organisations as part of the process. Subjecting hospitals to the instability of a retendering process could be disastrous. I have seen it happen myself. Staff numbers will fluctuate wildly as doctors and nurses, unsure if their organisation will survive, start moving between providers – just as they do in, say, the banking sector. This will potentially destroy continuity of care, as well as in-patient and emergency service provision which relies on regular staff numbers round the clock. A hospital shutting down as a result of losing a bid to a private sector provider, who has undercut their costs as a way of breaking into the UK market – rather than failing to provide an adequate service – could be a potentially dangerous event resulting in the collapse of secondary health care provision for the entire local area. This is why unfettered free markets are a bad idea for health care, and why the US experience has led to a hard fought reversal away from marketization. This is also why, if they were asked to vote for it, the public never would. In fact, in the last election they clearly did not. The Conservative manifesto, with its “no major reorganisations” commitment gave exactly the opposite impression. The only way such drastic privatisation can ever be achieved is through a short sharp shock to the system. Nick Boles, the pro Cameron Conservative MP, laid it out starkly, “’Chaotic’ in our vocabulary is a good thing.” Friedman would be proud. As he himself said, “only a crisis – actual or perceived – produces real change”. This is clearly not chaos by incompetence. It is chaos by design.

Brent Fightback will be conducting a public survey about the proposals in Wembley in early May and are organising a contingent to take part in the 'March to Save the NHS' which takes place on Tuesday May 17th (Assemble 4.30pm at University College Hospital, Gower Street, WC1 to march to the Department of Health, Whitehall.

Further information on Keep Our NHS Public
Posted by Martin Francis at 12:02:00