The report on the Libraries Strategy which will go to the Executive on April 11th has now been published LINK to Report and Appendices.  It recommends the closure of six libraries despite massive opposition and rejects all the alternative proposals that have been put forward.

82% of respondents said that the rationalisation proposals which include the closures was unreasonable against 11% who thought it was reasonable. 24% of respondents agreed and 61% of respondents disagreed with the broad proposal that Brent Libraries will become community hubs with revised service delivery and funding principles.

The report attempts to undermine these figures by suggesting that respondents are unrepresentative:


8.5 It is therefore all the more important to recall that consultation does not constitute a referendum. There are serious challenges within the consultation feedback as to how representative it is of library users, of non-users, or the borough’s population as a whole. Members should be aware of these shortcomings as they consider the weight they give to the outcomes of the three-month consultation alongside the other drivers for change, including the needs assessment, the available resources and the equalities impact assessment.
8.6 In particular:
• Only 23% of the Borough’s population used a Brent library in the last year (borrowed at least one item during the year and/or accessed ICT services) which is in itself an important challenge for the new library offer. By contrast 87% of respondents to the questionnaire use a library regularly (at least once a month). It proved extremely difficult to engage with non-users and analyse their reasons for not using the libraries, which highlighted the importance of improved marketing of the services available
• respondents focused almost exclusively on the proposals to close six libraries.
Thus Kensal Rise (34%) and Preston (24%) users account for 58% of all questionnaire responses, and 83% of all responses named one of the six. However, all six libraries taken together represent less than 25% of total library visits in 2009/10 (without adjusting usage to account for the temporary closure of Harlesden library)
• some elements of the questionnaire responses are contradictory. For instance, 61% of respondents disagreed with the broad proposal that libraries become community hubs with revised service delivery and funding principles, but 79% of respondents suggest that libraries could also be used as community meeting places and 44% that other public services could share library buildings.
• The population of respondents is significantly different from that of the population of active borrowers, and from that of the Borough as a whole, particularly in relation to ethnicity. 60% of respondents identified as white (45% white British), compared to 32% of active borrowers.
• where it was possible to have a more detailed conversation, for example at the Open Day, or analysing the Red Quadrant research undertaken in October 2010, there are differing opinions about the ambitions for the service, for example concerning the balance between PC availability, quiet space, stock and children’s services.

My claim that young people will be disproportionately  hit by the closures is supported by the Report's figures on young borrowers:

The Report considers in detail (Appendix 6) alternative proposal.s It rejects outright proposals to reduce opening hours of all libraries to keep all 12 open, cutting of 'support' costs by 90% and making savings elsewhere.

Specific proposals are given a rating of 1 - 4 as follows: (Click to enlarge) 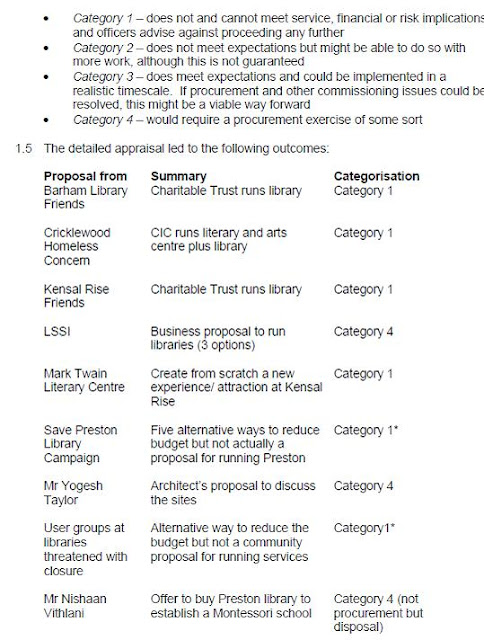 The report does not recommend consideration of any of these proposals and goes on to reject specific schemes that have been put forward: (Click image to enlarge) 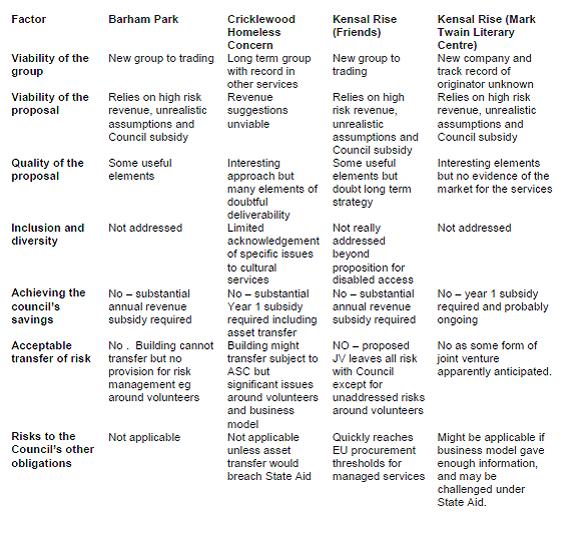 A number of Petitions will be presented to the Executive at their meeting on April 11th which together contain approximately 9,600 signatures although there is likely to be some duplication. Numbers are as follows:
Petition, Lead Petitioner, Approx number of Signatures
Cancel Plans to Close 6 Libraries, Wembley Observer, 124
Keep Cricklewood Library Open, Friends of Cricklewood Library, 1317
Against Closure of Neasden Library, Local Residents, 800
Save Preston Library, Conservative Councillors Colwill and HB Patel, 819
Save Preston Library Campaign, Samatha Warrington, 5897
Stop Labour's Library Closures, LIB Dem Councillor Lorber, 672
These documents are very long and  this is only a quick summary. I would welcome comments about other aspects of the reports from readers and campaigners.
Posted by Martin Francis at 19:20:00

This bit about "virtual libraries" is laughable:

Brent Libraries will be at the forefront of the revolution to ensure that services can be accessed on a 24/7 basis and are not limited to static library buildings. Library members will be able to access a virtual library from the comfort of their own homes. Virtual service will include being able to:
Search the catalogue, access library accounts, reserve and renew items online from any computer or smart phone.
Book a computer (FROM YOUR OWN HOME COMPUTER!!!)
Receive overdue reminders by email or text
Use our online reference resources for study and homework
Access an online enquiry service
Borrow e-books and audiobooks online (subject to the constraints of
distributors and publishers)
Join our email list for a monthly newsletter
Take part in virtual reading groups
Access virtual homework help
we will develop a library app for smart phones that will make our services more accessible. Users of the app will be able to find their nearest library with
directions. It also has up to date information about library events, activities, and service updates.
Online bookings for events and activities
Events and talks will be recorded and filmed for You Tube and Podcast.

Now call me old-fashioned, but what about the ability to walk to a local library, browse the shelves - perhaps ask a librarian for their recommendataion - and borrow a book?

In particular, volunteer groups have to consider revenue-raising activities in the library. The council doesn't seek to raise revenue from libraries because it doesn't have to provide a return on taxpayers' investment, "it just provides services" (Sue McKenzie)

And "Does this represent a service which meets identified needs and aspirations amongst local communities?"

And "How would the proposal
ensure that disadvantaged groups, for example teenagers wanting to study but
with limited home facilities, were able to use library facilities?"

Brent's answer to that is simple: get on a bus and go to another library.


3 Seven factors for appraisal.
3.1 Seven key factors have been identified for the appraisal. For each of these some
potential questions have been identified to guide the appraisal. It is not proposed
that these are formally scored, but that officers will evaluate each of these factors
using their professional judgement to determine the overall robustness of the
proposition. The appraisals and judgements will be recorded to support any
further debriefing, advice to members and future proposals.

Appraisal of the proposal

• Viability of the group making the proposal: is it a legal body with which the
Council could enter into a contract? How long has the group (or its constituent
bodies if it’s effectively a federation) been in existence. Does it have any existing
business, track record, income, assets or staff? What evidence is there that it will
last beyond the initial burst of enthusiasm?

• Viability of the proposals: what assumptions are made in revenue models eg
about footfall, fees, fines? Does the group propose to use all or part of the space
for revenue-generating activity (eg events, hot-desking, training), and if so how
realistic are the projections? Are the costs realistic and have they included
appropriate and adequate insurance and provision for building maintenance?
Has the group made assumptions about capital works to the buildings and if so
are the costings realistic? Where would the funding come from?

• Quality of the proposals: does this represent a service which meets identified
needs and aspirations amongst local communities? What evidence is there that
the local community has been instrumental in forming these aspirations., and
what consultation or research has the group undertaken? Are there elements
which contradict/undermine the Council’s knowledge of the local community from
other sources? Will this proposal be flexible in developing access to information,
books and technology in the coming years? Is the proposal still, at heart, a
library, or is it essentially something else which might house an outreach service
from the Council’s library service?

• Supporting diversity and inclusion: has the group recognised the importance of
ensuring services for all parts of the community, and the Council’s commitment to
reach groups who are not traditional library users? How would the proposal
ensure that disadvantaged groups, for example teenagers wanting to study but
with limited home facilities, were able to use library facilities?