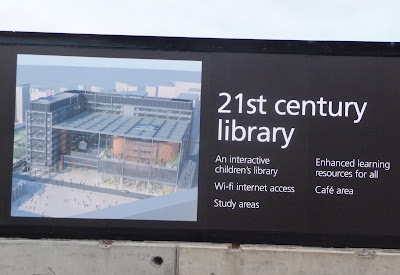 The latest edition of Wembleyway (and the last - the paper edition is a victim of council cuts) has a lead story lauding, Soviet Weekly style, the new Civic Centre. The paper claims, "The building is affordable and has the backing of all Brent's political parties...."   Regular readers will know that Brent Green Party opposed the plans from the beginning but Wembleyway is correct in that Labour, Liberal Democrats and Conservatives all approved the plans under the last administration.  However Labour raised concerns about the affordability of the project during the General Election campaign, only to revert to support once elected, while Cllr Reg Colwill for the Conservatives in the ITN interview BELOW says he can't see what is wrong with Brent Town Hall and that improvements could have been made to it at a fraction of the cost of the new Civic Centre.  Paul Lorber for the Lib Dems has already called for the Civic Centre mega library to be scaled back.

Meanwhile the council continues to insist that the new Civic Centre is cost-neutral with '...no burden on Brent's council tax payers. The cost will be met with efficiency savings and savings achieved by moving out of more than twelve existing buildings."   The project costs £100,000,000 which Brent Council will borrow and they claim the new building will save them £4,000,000 a year. So we will get our money back in 25 years time. A bargain!
Posted by Martin Francis at 15:25:00

Well, there's nothing wrong with a 25-year payback on an asset that may last, say, three times that, actually.

The sums are presumably not quite that simplistic.

But you may like to monitor the disposal of all the buildings the council is moving out of, when it comes to that.