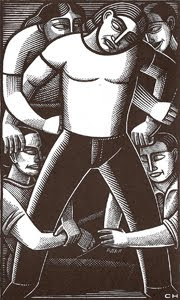 As Brent Council moves into the second phase of redundancies many of the remaining local government workers are finding themselves taking on additional work.  This is not just the work of those who have been made redundant as a result of cuts but also extra work  caused by the increased needs of Brent residents hit by cuts and the recession.

I recently received an e-mail from a Brent employee sent from their office at 7.30pm. Increased work demands result in longer (often unpaid) hours, increased stress and eventually increased sickness.  As a result so-called 'efficiency savings' actually result in inefficiency.This is exacerbated by the fact that many senior staff have taken redundancy leaving less experienced colleagues to deal with complex issues. The result is errors, delays and even loss of some funding in the case of the temporary primary school expansion programme. The setting of final school budgets for the current financial year have been delayed as firm figures are not yet available from the Council and it is likely that schools will not be able to submit their final figures, approved by governing bodies, until June. This may cause cash flow problems in some schools.

The central education services provided by the Council, which are 'bought-in' by schools, have had their workforces cut but the schools are being charged more. Many schools are looking to buy them from elsewhere on the basis that this offer is poor value for money (they have a statutory duty to look for 'best value') but information on Council service level agreements and precise costings were received so late in the budget making process that there has not been time to do this effectively. Other schools have reduced the number of services they buy-in, while some have wanted to support the local authority and decided to buy-in for this year and review the situation in 2012.

As different departments seek to meet savings targets and manage workload boundaries become more strictly policed, and disputes arise about which department is responsible for a particular area. Disputes involving say the clearing of rubbish from a vicinity arise as the Parks Department, Streetcare and Brent Housing Partnership all claim it is not their responsibility.  At a broader level there are likely to be disputes between the Council and Health over funding of particular areas of special needs such as speech therapy.

Inaccuracies, delays and lack of response are all likely to irritate the general public and infuriate them at times. Rather than blame the poor workers who are trying to hold things together against the odds we should put the blame firmly where it belongs: the Coalition for reducing local government funding and front-loading the cuts and the Labour Party and Labour councils for not putting up more of a fight.
Posted by Martin Francis at 18:00:00