The Future Under Carbon-rationing as Climate Change Hits Crisis Point 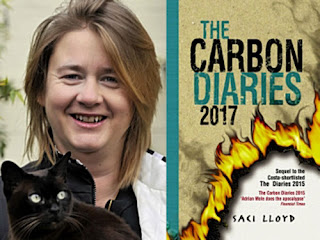 Author Saci Lloyd will visit the Willesden Green Library Centre on Saturday 9th April  to read from her acclaimed teenage novels “The Carbon Diaries 2015” and “The Carbon Diaries 2017”. Following the readings there will be discussion with a teenage audience about the prospect of carbon rationing in the UK and feelings about the threat of Climate Change.
This event is the first in a series of “Green Writers” at the Willesden Green Library Centre, where authors will read from their books about an environmental aspect and discuss them with the audience. The series is organised by the Brent Campaign against Climate Change in liaison with the Willesden Green Library.
Saci Lloyd's first novel “The Carbon Diaries 2015” was shortlisted for the Costa Book Awards in 2008.  Its heroine is Laura Brown, a teenager who struggles to cope with her family, dreams of a breakthrough with her punk band and fancies the boy next door. When on 1st January 2015, the UK is the first nation to introduce carbon dioxide rationing, Laura chronicles the events of  this drastic bid to combat climate change and illustrates how carbon rationing is threatening to turn her family, her local environment and the whole country out of control.
In the sequel “The Carbon Diaries 2017” Laura tours Europe with her punk band and becomes involved with an increasingly dramatic sequence of climate change-related events that include drought in Europe and Africa, a tidal-wave of desperate immigrants, a water war in the Middle East and clashes between Londoners and the army in the town centre.


Ken Montague, Secretary of the Brent Campaign against Climate Change says, “After the failure of the Copenhagen Climate Summit and the limited outcome of the recent climate talks it is easy to forget that if we don’t act now climate change will be a far worse threat to our future than the economic crisis. It will be the generation of Laura Brown's children who will see the fight over natural resources. ”
The reading and discussion is from 2- 4pm on Saturday, 9th April 2011 at the Willesden Green Library Centre, 95 High Road, Willesden, NW10 2SF. All are welcome. Please bring your copy of the “Carbon Diaries” along if you would like it to be signed by the author.
Posted by Martin Francis at 15:52:00