The locally well regarded Gladstone Park Primary School faces being forced to become an academy after an Ofsted inspection at the end of last year categorised it a Grade 4: 'Inadequate'. At the beginning of 2011 an interim inspection had given it a continuing Grade 2: 'Good' LINK with Christine Gilbert,  the head of Ofsted writing:


I am pleased to inform you that our interim assessment shows that the school’s performance has been sustained and that we can defer its next full inspection.

As a result, the next full inspection will not take place any earlier than the summer term 2012 unless we receive information in the course of the coming year that causes us to inspect earlier. I wish everyone involved in the school continued success in the future.

A  'desk top' grade of 4 in November 2012 has clearly left all concerned puzzled about what happened in the interim apart from the changes that took place in the Ofsted Inspection framework.

There was a meeting at the school for parents yesterday to report on the inspection. One parent told me:


For many, it was the first they'd heard of the push from the Department of Education for Academy status, and there were spontaneous exclamations of 'No!' 'and 'Why?!' on finding out this was the implication of the OFSTED inspection. I think it's fair to say most of those present are against forced academisation, and there was an almost unanimous sense that the term 'inadequate' bears no relation whatsoever to children's everyday experience at school.

In what someone has dubbed the 'Return of the Dragon' former Brent Director of Education Jacky Griffin has been given the task of managing the transition to academy status. It appears that some governors and parents are determined to challenge the Ofsted findings and the forced academy and I will keep you updated with events. At present there has been no statement from Brent Council or Brent councillors about the situation.

It is fair to say that Jacky Griffin was not universally popular in Brent. She moved on to Kensington and Chelsea where she got an early retirement deal after her job was restructured out of existence.She now has a role with the DfE in promoting academies and free schools. 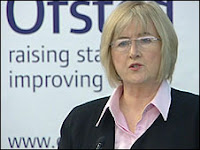 So it was rather interesting to hear new Brent Interim Chief Executive Christine Gilbert fronting a report that was critical of some academies' covert selection of pupils to boost results. LINK  Gilbert, who is the former chief of Ofsted, inherits a situation in which most non-voluntary aided secondary schools in Brent  have become academies with  possible conflict at Preston Manor over academy conversion and a Gladstone Park resistance campaign possible.

To cap all this there are several free school applications in the offing in the borough with rumours circulating that the building identified by Katherine Birbalsingh's 'Michael Academy' may be Arena House, opposite Wembley Park Station, which is being sold off by the College of North West London to raise money. Teacher unions in Brent are campaigning against the Free School and seeking support from the Labour Council. Michaela Academy has been resisted by two other London boroughs. If true this means that there would be three schools in the same vicinity with Preston Manor down the road and Ark Academy opposite. There is also the possibility of a 1,500 pupil Lycee at Brent Town Hall.

See my earlier reports on the background to Birbalsingh.LINK1    LINK2