Standing up for the Palace walls in Wembley

Philip Grant of Wembley History Society has asked me to post the following Guest Blog: 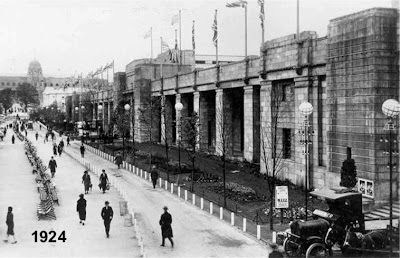 The Palace of Industry during the Exhibition, looking up Kingsway (renamed Olympic Way in 1948) towards the Empire Stadium.
[Source: Brent Archives – Wembley History Society Collection] 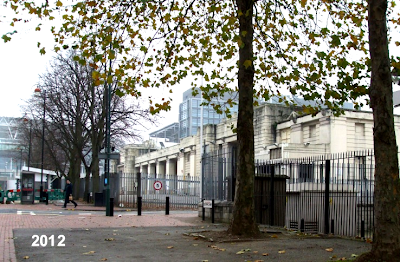 The remaining section of the Palace of Industry in Olympic Way now, with the new Civic Centre and Wembley Stadium beyond


Your recent item on Quintain’s planning application for a 1,350 space temporary car park near the new Civic Centre attracted my attention. When I looked at the details online, I found in the “small print” that it also involved demolishing the remaining part of the Palace of Industry, Wembley’s last remaining building from the 1924/25 British Empire Exhibition (“BEE”). As its “Listed Building” status was removed about ten years ago, this is no longer regarded as a “heritage asset” which requires special consent before it can be demolished, but I believe its external walls should be allowed to remain in place for a little longer.

My reason for this is that 2014 will see the 90th anniversary of the exhibition, for which the Palace of Industry was built as part of the world’s “First City of Concrete”. The BEE was one of the most important events in Wembley’s history, giving us the stadium and bringing millions of visitors to the area, which promoted its rapid suburban growth over the following ten years. One of the main aims of the exhibition was ‘... to enable all who owe allegiance to the British flag to meet on common ground and learn to know each other’, and on an international level the BEE was an important stepping stone on the path from the old Empire to the modern Commonwealth of independent nations. To discover more about the BEE, and many other local history subjects, visit the Brent Archives online Learning and Resources collection at LINK


Since 2010 I have been involved, as a volunteer, in discussions with Brent Museum and Archives about an exhibition and other events in 2014 to mark the BEE’s 90th anniversary. More recently the Arts team for the new Civic Centre (currently nearing completion at the southern end of the Palace of Industry site) have become involved, and although no final plans have yet been drawn up it is likely that these events will take place. It would be a great pity if these walls, which illustrate the scale and architecture of this great exhibition, were to be lost unnecessarily just before that anniversary, when they could be enjoyed by visitors to Wembley during the summer of 2014, probably for the final time.


Looking at the plans, it would not be necessary to demolish the remaining outside walls on the north and east sides of the Palace of Industry building to facilitate the access, lighting and all of the car parking spaces which Quintain are seeking. Only a small part of the outside walls at the north-west corner would need to be demolished, to allow access from Fulton Road. I have therefore written to Quintain and their planning agent, asking them to amend their plans so that these historic walls remain standing to their full height until they are ready to construct the proposed shopping centre which is planned for a later phase of the Wembley City redevelopment.


Paula Carney of Signet Planning has said that she will liaise with her client on this and come back to me. However, in case they are not prepared to co-operate, I have also put in an objection to the planning application, which other Wembley History Society members and people interested in our local heritage are supporting. These objections do not seek to prevent the use of the site for temporary car parking, but do seek to make consent for that parking conditional on retaining the outside walls of the Palace of Industry building until the main construction phase of work on the site is ready to go ahead.


If you would like to add your support for the walls (not physically, as their ferro-concrete construction means that they can stand up by themselves!) please go to the Brent Planning website at: LINK  then use the "Comment on this Planning Application" link.  Alternatively, please send an email, quoting the reference number 12/3361, to David Glover, the Brent Case Officer dealing with the application, at:  david.glover@brent.gov.uk . Thank you.