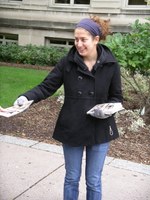 Brent Council's revised regulations regarding the licensing of leaflet distribution designated areas  the borough caused considerable controversy last Spring. Initially said to be aimed at limiting litter during the Olympics it was later justified as merely tightening up existing regulations. LINK

There were concerns that voluntary organisations and campaigning groups may have had to request a licence months in  advance of any events and the impact this would make on free speech. The complex regulations seemed to be using a sledgehammer to break a nut and suspicions that it was a disguised money making venture that would impact on small business.

No one has come to me to say that 'political' leafleting has been affected but I made a Freedom of Information request top find out how much licensing had actually take place.


I got a very quick response (thanks, Yogini Patel ) and here are answers to my questions (Answer in bold):

1. How many licences were issued after the introduction of the new regulations up to December 31st 2012?  20
2. How many were refused? 4

3. List the number of licences issued for each designated area? Wembley 18, Neasden 2

4. List the number of licences issued during the period of the Olympic Games 2012 compared with the normal period. 9 during Olympics, 11 outside Olympics


5. How many unlicensed distributors were given warnings by council officers? 28

6. How much increase was there in the amount of littering in designated areas during the Olympic Games 2012 compared with normal times? This information is not gathered but observations suggest that during the Olympics streets appeared to have less litter.