Press release from the Save Roke Primary campaign who, like Gladstone Park Primary in Brent, are fighting forced academisation: 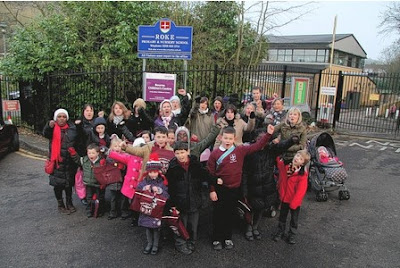 Michael Gove is now forcing well performing schools like Roke Primary in Kenley to become academies, as well as long term failing ones. This fits in with his desire to accelerate his academies programme. Roke may be one of the first but many are likely to follow.

Roke Primary, a previously ‘outstanding’ school, is not underperforming but the DfE are handing it to the Harris Federation, run by David Cameron’s personal friend and major Tory donor, Lord Harris. The decision was made just 4 months after one poor Ofsted report caused mainly by computer failure. The Guardian published claims that Gove may be flouting his own guidance on forced academies, “…his department’s official direction say this should only happen when a school has been underperforming for some time and if the problems are not being tackled”. Guidance set out in the 2010 Schools White Paper is very clear. “Where there has been long-term underperformance, little sign of improvement and serious Ofsted concern, we will convert schools into Academies,…” (Section 7.18).

Parents believe that forced academy at Roke is going against this guidance. Roke has no consistent history of low performance. The latest SAT results are above the national average. Roke has never been below floor targets. Both Ofsted and the Local Authority agree that Roke is improving. Ofsted’s recent monitoring verdict, received by parents on Friday, was that satisfactory progress has been made. This was the best rating Roke could achieve without a longer time between inspections to show improvements had been sustained. It is clear that Roke has improved without the need for academy status or sponsorship by the Harris Federation. Despite this, forced academy is still going ahead.

Parents are campaigning against forced academy, and the complete lack of consultation or right of appeal. They are concerned about the speed and manner in which forced academy has occurred. They oppose Harris as sponsor. Their choice is Riddlesdown Collegiate, the local secondary academy, to which most Roke pupils progress. A long term partnership with Riddlesdown has become closer since Roke was issued a ‘notice to improve’. It is clear, from the progress made, that the partnership is working. If, forced academy must go ahead, Riddlesdown, not Harris is the governor, parent and staff choice of sponsor.


Roke parent, Angeline Hind said, “I thought sponsored academies were all about improving schools which have been underperforming for years. Roke is a good school which wavered before turning itself around very quickly. To force us into academy with a sponsor used to dealing with seriously failing schools seems like an extreme reaction”. Parent Debbie Shaw commented “Roke is a great catch for an academy chain like Harris, our results are already good and they will be able to claim the credit for improvements that have already happened”. Father Nigel Geary-Andrews said “It is alarming that the government is rushing through forced academies on schools like Roke, where there is no proven record of failure over any length of time, without any consultation with parents at all and no way of appealing. This does not seem democratic or transparent to me”