Extreme weather: where are the flood risk areas in Brent? 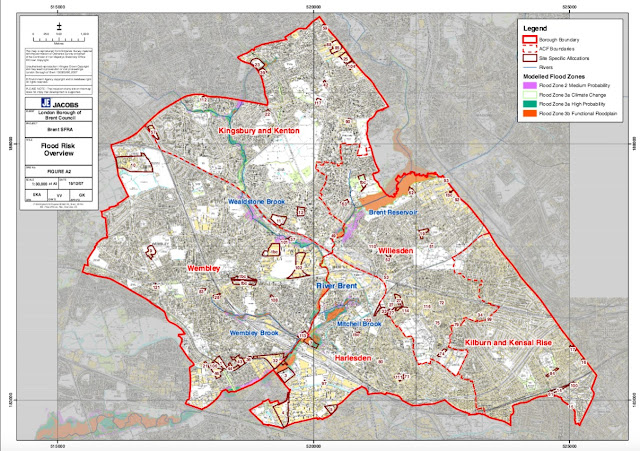 As a young teacher in Fulham in the late 70s I experienced flood practice as well as fire practice. It included tying down the lids of lavatories to stop sewage rising in the event of the Thames flooding. One member of staff was designated the contact person for the Council which as I remember included wading down to the council offices in the event of loss of telephone contact to update them on the latest situation.

That was all rendered obsolete when the Thames barrier came into operation in 1982.

In Brent the danger is not from the Thames but from the Silkstream and the River Brent and numerous brooks (Wealdstone, Wembley, Mitchell etc) some of which are underground in conduits but emerge at times of flood in places such as Brentfield Road.

The Brent itself has flooded in the past but culverts and flood plains have been created and the river 'naturalised' in places such as Tokyngton Park where underground storage tanks for excess water have been installed. Similar plans have been made for the Wealdstone Brook as it flows past Wembley Park Station and into the development area near Wembley Stadium, eventually meeting up with the Brent, but there has been little news on the proposals since they were first suggested. Meanwhile the amount of development in the area, including where there used to be a boating lake, has increased rapidly with much of the area paved over. In February 2014 Brent Council announced a programme of work aimed at flood prevention in the borough LINK.

There is no immediate threat of flooding in Brent but with increased severe weather events making nonsense of '1 in 100 years' flooding assessments, it is well to be aware of the areas that could be affected if we experience what the North West of the country has over the holiday.

In 1841 the Welsh Harp (Brent Reservoir) overflowed and water gushed down stream causing a number of fatalities. The dam was subsequently heightened and strengthened. In 1976 following the storms that ended the hottest and driest summer for years the sluice gates had to be opened at the Welsh Harp and there was flooding downstream involving the evacuation of many families from their homes.

One would hope that Brent Council has contingency plans in place after recent extreme weather events.

Gentle Brent, I used to know you
Wandering Wembley-wards at will,
Now what change your waters show you
In the meadowlands you fill!
Recollect the elm-trees misty
And the footpaths climbing twisty
Under cedar-shaded palings,
Low laburnum-leaned-on railings
Out of Northolt on and upward to the heights of Harrow hill.

This is the Environment Agency website. You can submit your postcode to see any flood warnings in your area:  LINK
Posted by Martin Francis at 17:17:00


How many of the schemes referenced in the Brent council link of Feb 2014 have been implemented?

The Chamberlayne Road scheme referenced in the link - is that supposed to be the Thames water sewer flooding project that completed in 2014? - involving the installation of huge sewer storage tanks in Tiverton Green and Chamberlayne Road.

May be worth an FoI request.