Not tuppence a bag but £80 fine for feeding the birds, say Brent Council

I really shouldn't have published that video on Brent Council's 'Sugar Free Tuesday' but it seemed appropriate as the Council has decided to discourage people from feeding the birds. This is the announcement on the Council website:

Residents are being encouraged not to feed birds in local parks and public spaces, as the leftover food is attracting rats and the animal droppings are damaging the local environment. Some of the borough's parks and green spaces are suffering from visitors leaving bread and other household food waste out for local birds, with Butler's Green a particular area of concern, according to the council. 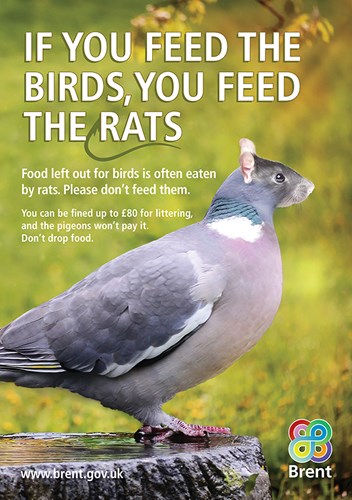 People who do feed the birds risk an £80 fine. Rob Anderton, Head of Public Realm, "Birds are wild animals and can find their own food. Feeding them makes them rely on humans and even become aggressive when they see people with food. "Leaving out food also makes the area dirty as it decays and then attracts flies and rats. This, together with bird droppings from the overfed animals, creates health issues for other park users and local wildlife, as well as damaging public seating, buildings and even pavements."

Cllr Eleanor Southwood, Lead Member for the Environment, said "Our priority is for Brent to be a great place to live, and we are rightly proud of our wonderful parks and green spaces. "However, the problems caused by a small minority of people feeding birds is causing a problem in some of our parks and open spaces. I urge everyone who cares about our open spaces to not leave food out for birds and help us to make Brent a cleaner and greener borough."
Posted by Martin Francis at 08:15:00

"Birds are wild animals and can find their own food. Feeding them makes them rely on humans'.

Quite right! Pigeons are scroungers! It's another aspect of the dependency culture which has sapped the spirit of the country since it was introduced by trendy lefties in the 1960s. Do you know that here are families of pigeons in Brent in which no pigeon has worked for 3 or 4 generations! They're content to live on handouts from hard-working families while they sit around in their nests all day with their obese pigeon offspring watching Jeremy Kyle on their massive flat-screen tv sets. And no wonder they've got so many kids. They don't have a proper breeding season like decent birds. No, you see them at it all year!
And don't get me started on the sparrows! They come over here taking our seed and berries, they hardly speak a word of English and they expect to immediately get a 2 bedroom nest in a luxury Brent tree while honest hardworking British robins are forced to live with their mums til they're middle-aged. Six months down the line and they're claiming to be Cockney Sparra's and they're telling winter migrants like redwings and fieldfares to go back where they come from.

Enough is enough! Send them back I say to Rob Anderton! British bread for British birds. Let's make this Public Realm great again!

My prediction is that if the 80 quid fines don't produce enough of an income stream after a year or so they'll use the rat and fly menace to shut down all the local parks and green spaces on H&S grounds and flog them off for buy-to-leave investment building for far east capital. By which time invasion by Islamic State will be seen as a merciful release.

Miserable gits.
Let people feed the birds with austerity you have to get enjoyment where you can.

What bird brains! Memo to Brent Labour - Bird Food shortages can occur all year around and a ban in winter when birds need food the most can be a matter of life and death survival. I'd urge people to ignore this advice and engage in some civil disobedience.

--------
Some advice from the RSPB.
-------
When to feed wild birds
http://www.rspb.org.uk/makeahomeforwildlife/advice/helpingbirds/feeding/whentofeed.aspx

Although winter feeding benefits birds most, food shortages can occur at any time of the year. By feeding the birds year round, you'll give them a better chance to survive the periods of food shortage whenever they may occur.

Autumn and winter
At this time of year, put out food and water on a regular basis. In severe weather, feed twice daily if you can: in the morning and in the early afternoon.

Birds require high energy (high fat) foods during the cold winter weather to maintain their fat reserves to survive the frosty nights. Use only good quality food and scraps.

Always adjust the quantity given to the demand, and never allow uneaten foods to accumulate around the feeders. Once you establish a feeding routine, try not to change it as the birds will become used to it and time their visits to your garden accordingly.

Spring and summer
Only feed selected foods at this time of year. Good hygiene is vital, or feeding may do more harm than good.

During the summer months, birds require high protein foods, especially while they are moulting.

Avoid using peanuts, fat and bread at this time, since these can be harmful if adult birds feed them to their nestlings. If you feel you must put out peanuts, only do so in suitable mesh feeders that will not allow sizeable pieces of peanuts to be removed and provide a choking risk.

Home-made fatballs can go soft and rancid in warm summer weather, and should be avoided. Commercially produced fat bars are suitable for summer feeding but discard any remains after three weeks.

Temporary food shortage can occur at almost any time of the year, and if this happens during the breeding season, extra food on your bird table can make a big difference to the survival of young.

Birds time their breeding period to exploit the availability of natural foods: earthworms in the case of blackbirds and song thrushes, and caterpillars in the case of tits and chaffinches. It is now known that if the weather turns cold or wet during spring or summer, severe shortage of insect food can occur, and if the weather is exceptionally dry, earthworms will be unavailable to the ground feeders because of the hard soil.

Natural food shortages
If food shortages occur when birds have young in the nest they may be tempted by easy food put on birdtables to make up the shortfall in natural food, initially to feed themselves, but if the situation gets bad enough, they will also take the food to the nest.

If the food offered on your bird table isn't suitable for the young chicks, it can do more harm than good, and can even be lethal to the chicks as they can choke on the food. It can be difficult for a human to gauge when food shortage in the wild occurs, and hence it is best not to put out food that is likely to create problems during the breeding season.

Nice to see Brent Labour really addressing the crucial issues in the borough.

Well, its one way to divert attention from the allegations of breaches of the Members' Code of Conduct against Cllr. Butt, and the efforts of Brent's Monitoring Officer to claim that these are somehow outside the scope of the Code, and should not be referred to Standards Committee. See:
http://wembleymatters.blogspot.co.uk/2015/11/standards-at-brent-council-open-letter.html

You'd think birds would be grateful for the opportunity to be housed and fed here in Britain and be given an identity: but oh no. How do they repay us? They steal our identity ring and fly off with it to Sri Lanka [and bring a whole new meaning to 'net migration' in the process...........]

Not a great way of diverting attention I'd say, Philip - creatures running amok, doing untold damage, no standards to speak of, associations with gutters and sewers - remind you of anything?

According to an online source, ‘Feeding birds in your own garden is not against the law. And since I do not claim ownership of those wild birds, I can’t be held legally accountable for their actions.’ If so, then presumably I cannot be held legally responsible for the actions of other wild creatures in my back garden either (rats, foxes, etc). Moreover, in asking tenants to leave food bins outside, local councils are guilty of vastly more 'encouragement' of rat-feeding than garden bird-feeders. These bins are overturned nightly by foxes etc, and their contents thus made freely available to anything that moves out there (so irresponsible or what?). It is all too fatuous for words.