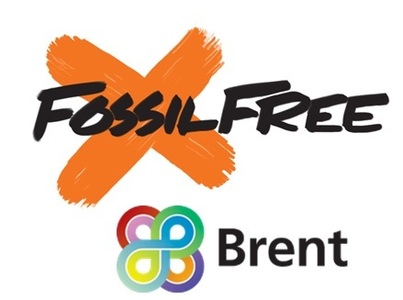 A meeting at City Hall on March 6th will bring together councillors and council officers from across London to consider the practicalities of divesting local authority pension funds from fossil fuels. Brent Labour Party's local election manifesto pledged to start the process and other London boroughs have made similar pledges.

Bringing together people from different boroughs is important as council have shifted pension fund investments  into a cross borough Common Investment Vehicle (CIV). Investment decisions will vary borough to borough as their pension funds will be in different positions in terms of the value of their investments versus pension commitments. Some will be looking for a high return to top up funds, with an associated risk, while others will be in a strong position and happy with lower returns on more risk-free investments.

Fossil Free Brent - non-party political campaign has been gathering signatures on a petition setting out the case for divestment and recommended actions by Brent Council:

The petition is below. You can sign it HERE

Brent Council should divest its pension fund from fossil fuel companies to protect the people of Brent. So we ask Brent Council to make a public divestment statement committing the Brent Pension Fund to:

2. Divest from direct ownership and any commingled funds that include fossil fuel public equities and corporate bonds in the top 200 list and shift these funds to lower risk, ethical investments before the May 2022 Council elections

3. Advocate to other pension funds, including the London Pension Fund Authority and Local Government Pension Scheme members to do the same

4. To do the above in a timely manner - by setting up a working group to report back on a strategy to bring about divestment within three months from the submission of this petition

We believe divestment from fossil fuels to be not only ethically and environmentally correct, but also financially prudent.

Climate change is the greatest challenge humanity has encountered. The 20 hottest years on record have all occurred since 1981 and 2016 was the hottest ever [1]. Higher average temperatures are directly linked to extreme weather events such as heat waves, droughts, floods and storms.

Scientists have unanimously concluded that these changes are a consequence of human activity, arising from the burning of fossil fuels [2]. Moreover, this activity has resulted in unprecedented levels of air pollution, now regarded as a major world killer [3].

In a speech at Lloyd’s of London in September 2015, Mark Carney, Governor of the Bank of England said that by the time ‘climate change becomes a defining issue for financial stability, it may already be too late’. Carney warned investors that policies to address climate change ‘would render the vast majority of reserves ‘stranded’ – oil, gas and coal that will be literally unburnable’ [4].

In order to continue developing fossil fuel reserves – particularly in the difficult areas where the remaining reserves are located (including the Arctic, the mouth of the Amazon and tar sands in sensitive areas) the developing companies need investment – divestment is a way of cutting off the funds needed to carry out these damaging activities. It also sends a powerful signal to the companies and others that it is time to move away from fossil fuels towards renewable energy.