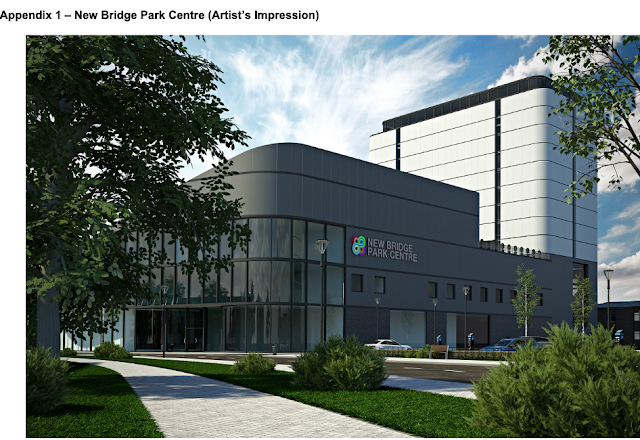 A press release on the Brent Council website today, entitled 'Building Bridges in Stonebridge', sets out revised proposals for the site but appears unlikely to satisfy those residents who accuse the Council of stealing  a Centre that was started by the community and owned by them. The artist's impression of the proposed building seems to rub that in with the Brent Council logo clearly visible on the facade.

Meanwhile the campaign will be going to the High Court in the Strand on Wednesday February 27th (10.30am) to challenge Brent Council's sell-off of the Bridge Park Complex: LINK

Neither the press release nor the report for the February 11th Cabinet mention the disputed ownership or the recent Raheem Styerling intervention.

Bridge Park residents could see a new community hub on their doorstep if the revised proposals for the site are approved by Brent Council this month.

An enhanced proposal to replace the old leisure centre with a new community hub - including new leisure facilities, business space, a large community hall, accommodation for Brent's older residents and much more for the community - will be put to the council's cabinet on 11February.

The improved plans, which take on board feedback from a wide ranging consultation with residents in 2017, now seek to deliver a better environment, with modern flexible community facilities, affordable work spaces, jobs and much better leisure facilities

Subject to getting the necessary planning and legal approvals, the New Bridge Park Centre will contain:


Cllr Krupesh Hirani, Cabinet Member for Public Health, Culture & Leisure, said: "We know that Bridge Park is much loved and we now need to build bridges and work together to create something new and really special which caters for the needs of all of the residents in the Bridge Park and the wider Stonebridge area.


We've taken into account residents' feedback and the council is now proposing to deliver much more than a replacement leisure centre. We want to deliver a modern community hub that offers much more than was originally asked for. These revised plans include double the amount of community space, more affordable work spaces and much better leisure facilities.

It is only by working together that we will be able to create this community hub and provide much more for residents.

If approved, the council is keen to get residents involved in the detailed planning stage to finalise the specification for the community spaces. To view draft concepts and for more information visit www.brent.gov.uk/bridgepark

The report proposes an independent advisory group but significantly does not state how its chair would be chosen. Will the local community have a say on the appointment?


In order to fully involve the community to work alongside the Council’s Bridge Park development project team on the design, development, future operation and management of the new leisure centre and enterprise space, it is proposed to form an advisory group whose membership would be drawn from Brent residents.  The purpose of the group is:

To bring an independent, community-focused perspective to discussions and decisions about the future specification and use of the new leisure centre and enterprise space.

To engage with current and future users of the site and be an advocate and conduit for key messages about the progress of the development.  The group will be chaired by an independent person drawn from the local community who is knowledgeable, credible and capable of bringing together a focused group of 6-8 individuals to undertake the role of an advisory group.

The full report is below. Click bottom right for a full-screen version:

A quick email to let you all know about our upcoming Stonebridge Labour Party branch meeting. It'll be held at 12 noon on Sat 16 Feb at the usual place, 12 Southside, Beames Road, NW10 8BE.

On the agenda will be a discussion about Bridge Park Leisure Centre, the likelihood of (and planning for!) a General Election in the near future, and of course the topic that is paralysing politics nationally: Brexit. If you have other topics you'd like to talk about, please email me back and we can add it to the agenda! This is your meeting to discuss the things you want to discuss.

Please let me know by replying to this email if you are intending to come, so we can plan seating.

Tom Dolphin
Secretary of the Stonebridge branch of the Labour Party