As can be seen from  the images above the proposed new development is much denser and with the highest block 10 storeys, much taller. The amount of green space is reduced. 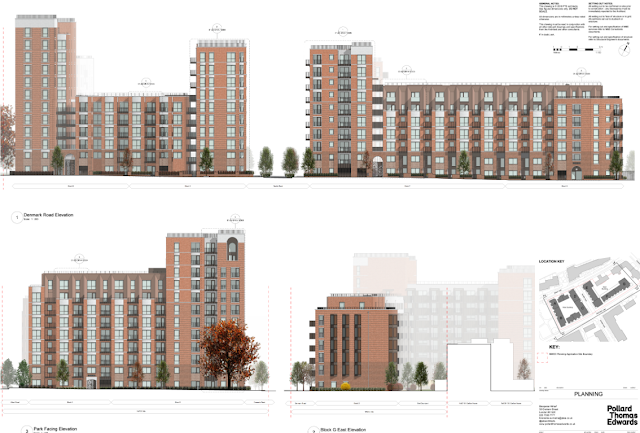 There are only two comments so far on the Planning Portal. One is classified as neutral and is concerned about the amount of car parking that will be available for 264 units. The over makes a number of points:

I strongly object to the current planning applications on the grounds that we will lose, privacy, light and outlook, especially those flats in Swift House that are south facing, looking over Albert Road.

I am the one of these Swift House flats and when I purchased the flat, the Brent council plans to replace Winterley, Neville and Carlton houses were to build 6 storey buildings max, which now have duplicated. This has a negative impact on the neighbourhood as well as on my property.

The main appeal when we purchased our flat was its light, privacy and outlook, which will be heavily diminished with the current planning.

Additionally, I would like to raise concerns about losing existing green spaces, amenity spaces and trees in the areas. The garden land around Neville House and Winterleys House will be replaced with 8 to 12 storey buildings that will make the area packed witch concrete. Also, the huge number of new dwellings will make the zone highly dense and increase the traffic narrow roads in the area.

With this in mind, I would like to object to these plans and ask to reduce the height of the buildings proposed in this plan, to reduce the impact on light and privacy on the surrounding buildings, and to avoid converting an area that now is airy and green into a packed, overbuilt and overcrowded area.

The Carlton House site is identified as having an indicative capacity for 66 dwellings, of which 29 for market and 37 affordable; and the Neville / Winterleys site as having capacity for 137 units, of which 61 would be market housing and 76 affordable units.

The Brent Council Forward Plan 15 indicates that the Cabinet on March 11th will discuss a ballot on South Kilburn Estate but gives no further information. The London Mayor has adopted a policy requiring ballots of estate residents affected by regeneration and one is to be held on the St Raphaels proposals.  This followed pressure from within and outside the Labour Party, including that of Geen Assembly Member Sian Berry. Release of Mayoral funding at £100k for each affordable unit and £28k for shared equity is dependent on ballots being held.

Residents will be concerned about the loss of community facilities involved in the proposals. The Planning Statement comments:

The proposed development will result in the loss of Carlton Hall, a 173 m2 community centre and a small community use (106 m2) on the ground floor of Winterley’s House that is currently used by a small nursery. Carlton Hall was previously used by the South Kilburn Trust, however this organisation has now moved to the new Carlton and Granville Centre within the wider South Kilburn estate. Carlton Hall will temporarily be used as a Doctor’s surgery until the   neighbouring Peel site is redeveloped where a new Health Centre Hub is being provided for the GP surgery in the longer term. The proposed Western Building will incorporate a small communal space on the ground floor that will be for the building’s residents use.

It is considered that there is sufficient community use provision in the vicinity of the site which includes Carlton and Granville Nursey, and Carlton Vale Infant School. Within and close to the wider South Kilburn estate there is a range of community facilities. This includes the St Augustine’s Sports Hall (with community access), The Tabot Centre After School Club, The Xhamia e Shqiptareve Community and Cultural Centre and The Vale Community Centre. There are also a range of local sports facilities nearby including Moberly Sports Centre.