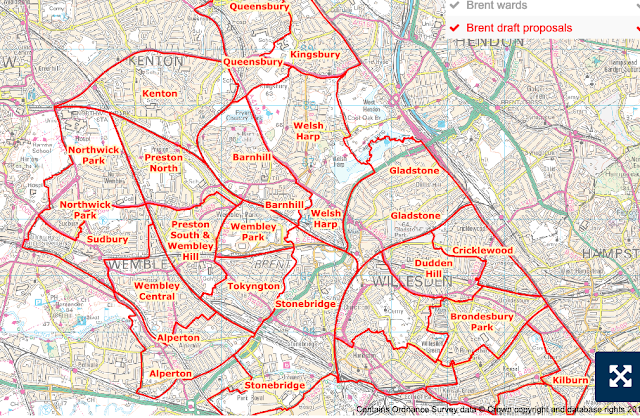 The proposals for redrawn wards in Brent have now been published and have already caused controversy. The aim is to even out the population:councillor ratio and in doing so 9 2 member wards have been created and 13 3 member wards. There will be 57 councillors instead of the present 63.

The new Wembley Park ward basically covers the Quintain development around Wembley Stadium and perhaps should have been named Quintain ward. We may well see Brent  council leader Muhammed Butt moving to represent that ward rather than Tokyngton, which previously covered Quintain's tower blocks, given that he is an exceptionally keen supporter of Quintain. The voting population of Wembley Park is expected to rise from 4477 to 8674 with new developments in the pipeline but given that Tokyngton had the lowest turnout at the local election at 29% it is unclear how many of the new 'lifestyle' residents will actually vote. 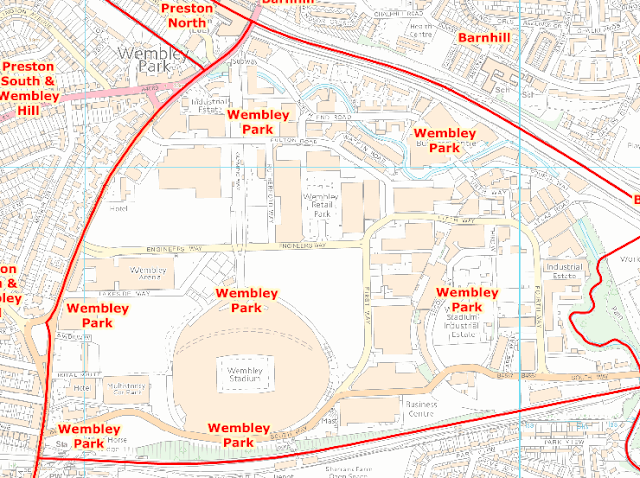 The consultation will consider proposals for changing the names of the proposed wards as well as the actual boundaries, Preston South and Wembley Hill feels clumsy although historians may enjoy the revival of the name Wembley Hill which was associated with a secondary school of that name which was bombed out during the second world war.

The document below summarises the proposals (click bottom left corner for full size version) and an interactive map and consultation details can be found HERE.  The consultation closes on April 19th 2019.

Given the 'strong leader and cabinet' system of local government has meant that the majority of councillors are rendered absolutely superfluous to requirements, it's no surprise that they're facing the axe. But, just because the system of democracy chosen by Labour has been dreadful and we effectively have a one party state, doesn't mean that we should be reducing democratic representation. Particularly as this is an area that doesn't have that more accessible, approachable level of governance in the form of town or parish council's that can really represent the concerns and aspirations of local communities.

The calculation as to who gets 2 or 3 councillor is also bizarre - the electorates of the proposed Alperton and Cricklewood have 100 people in it, but that equals an additional councillor.

I would like to say that in my ward, we have one super Councillor that listens to residents and is very proactive with the residents that engage with them. We have a newby that was just voted in and has yet to show their colours, and we have another one that is well past the sell by date. Nuff said. Whatever the outcome of this local councillors are voted in by the electorate and should be committed to representing the residents that voted for them. For the people by the people. I see so many Brent Cpuncillors that are not really committed to helping the residents just furthering their own ambitions and it leaves a bad taste in my mouth. I thought that being a councillor was a Civic thing that you want to help your community and your neighbourhood. My dad was a Labour Councillor for more than 30 years and was ultimately committed to his community but that was in the 50s,60s and 70s how things have changed

I would have liked to have seen you stand as a councillor Jaine. "one of the worse penalties about not participating in politics is that you end up being governed by your inferiors" - Plato.

At first sight, at least as far as my part of the borough is concerned, this is the worst set of proposals so far!

I live in Kingsbury, yet I (along with Kingsbury Station) will be moved to Queensbury Ward. One consequence of this might be that, when the new Parliamentary boundary changes are finalised, I find myself not in Wembley, but in a Harrow-based constituency.

I know that it is not possible to please everyone in an exercise like this, but I feel that these proposals rob me of part of my identity.