Did Labour's candidate for the Alperton by-election tweet admiration for Bob Blackman?

There may be more than one person with the name Chetan Harpale but if this is the same person who is standing for Labour in the Alperton by-election I am rather perplexed.

Expressing admiration for Bob Blackman, a right-wing pro-Modi Conservative (and ex leader of Brent Conservatives), who local Labour activists mobilised to unseat at the General Election may be one thing - but calling Jeremy Corbyn 'ProJihadis'...?

There is of course the possibility that the Twitter account was hacked and I will be happy to publish any clarification from the Labour Party. 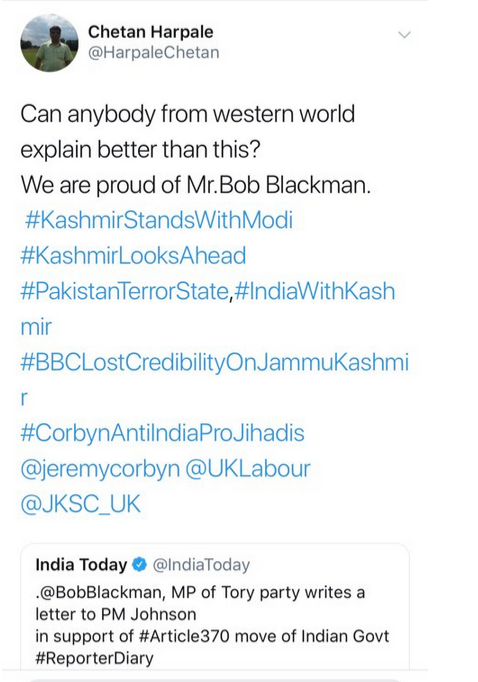 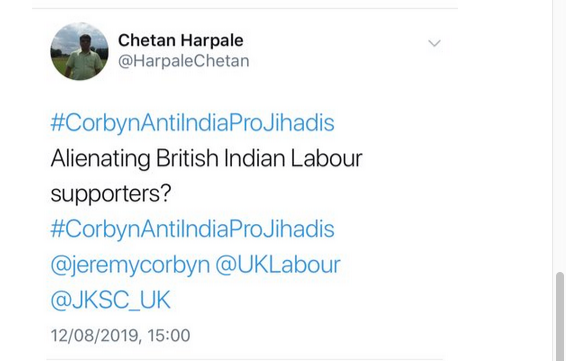 Harpale is standing to replace ex-Cllr James Allie who resigned under a cloud.

Or maybe it wasn't?

Labour Party rule book: "A member of the Party who supports any candidate who stands against an official Labour candidate, shall automatically be ineligible to be or remain a Party member."

Action should be taken.

Re Mike (09:53), it is highly unlikely that the account was hacked in the context and time period with the Labour policy on Kashmir.

It would be interesting to know if Chetan Harpale, if the tweeter was the Alperton by-election candidate, also supports Bob Blackman's view that caste discrimination should not be specifically included as an offence under Equalities legislation, which was the case at the 2017 General Election - see:
https://wembleymatters.blogspot.com/2017/06/is-caste-issue-in-general-election-in.html

I would hope that no prospective Labour politician (or any one else, for that matter) believes that any fellow human being should be discriminated against because of the caste, or class, they are perceived as having been born into.

'There may be more than one person with the name Chetan Harpale', but he must surely be the same Chetan Harpale who proposed James Allie as a Labour candidate for Alperton at the 2018 local election.

It's the same person

I being a labour supporter condemn this person's dual face and would support Lib Dem against him. If labour Party does not take action then it clearly does not care about the voters.

I can understand why you would not wish to support Chetan Harpale, but why would you support a Lib Dem, who may not have any connection with Alperton, rather than a Green candidate who lives locally, and has stood up for the interests of Alperton residents?

How can the Labour Party continue with a Candidate who has called current Leader of the Labour Party proJihadis (a term usually used to describe terrorist killers). Is it not time the Labour Party got its act together and not tolerated Labour cnadidates who are prepared to spread this kind of hate?

I feel that account was hacked or it be someone else using the similer name account created just to trap him. There are anyways few more accounts with similer names. As far as Kashmir is concerned.. i believe UK has nothing to do with it. The true news what i have read in International media is that Indian parliament removed a temporary Section of the law from their own Constitution which i believe India has right to do so and this the issue of Kashmir is India's internal matter. I don't about this but many news in states do say that Pakistan trains terrorist ...

Buy anyways i personally feel that this could be or this is hacked account or created by someone with similer name maybe to trap.