A rather excited Cllr Dar has posted this on Twitter: 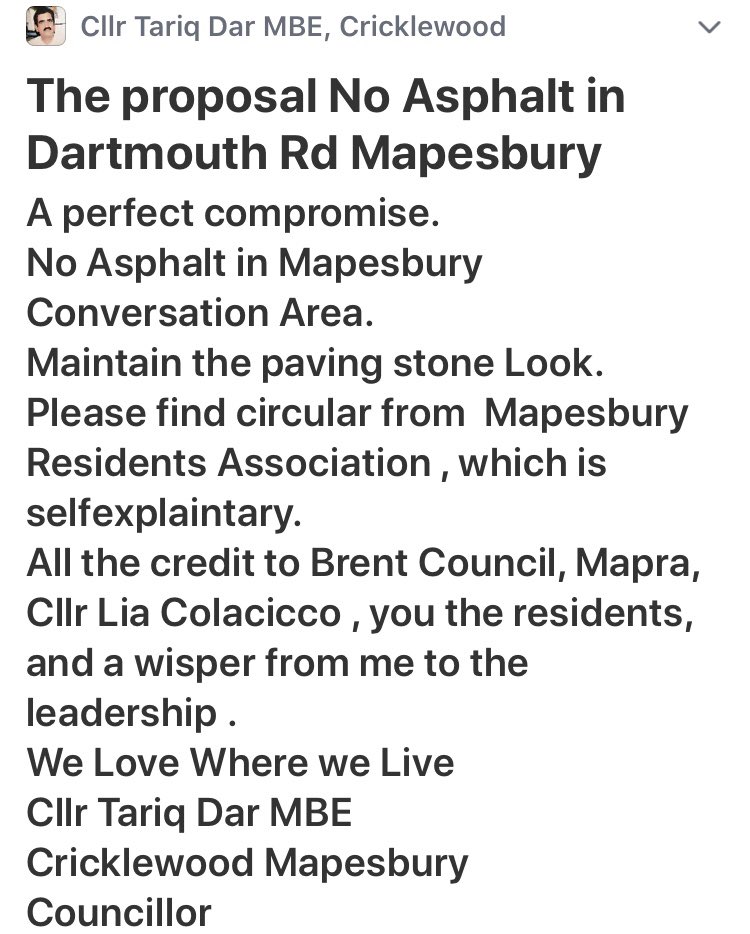 Although not mentioned in Cllr Dar's tweet the pavement survey LINK and petition must have been influential.

This is what the MaPRA circular says:


Pavements. Met with Council Officers today.  Faced with opposition from Cllr Lia Colacicco and also a residents’ petition against asphalting the pavements in 3 streets in the Mapesbury Conservation Area, the compromise they are offering is to give up their plan for wholesale replacement of the pavements with asphalt and instead (starting with Dartmouth Road) to carry out much-needed systematic repair. This would mean replacing/rectifying many cracked and defective paving stones with new paving stones (not asphalt) and providing a new treatment around the trees which is not yet defined/specified. There is an option for trees of either a surround made up of grey, recycled synthetic rubber balls, which are porous and don’t crack like tarmac or paving stones, or, if people want, there could be a built-up tree pit around each tree allowing residents to come together and plant and tend small plants around the base of the tree outside their home. The Council is open to suggestions from MapRA.

The proposal represents a good compromise; less cost than either wholesale replacement by paving or asphalt, lower environment impact, maintains the paving stone look in the MapRA area with less disruption while work is carried out. It should leave paving free of trip hazards. It may, however, not leave all of the pavements quite as smooth as new asphalt or completely new paving stones.

MAPRA were ambivalent at best to the changes, David Freedman has expressed preference for tarmac, with the subjective opinion that it's 'safer' and an email came around that was insulting towards the local residents who organised the pavement petition *and* got someone who did an economic analysis that indicated repointing/repairing slabs was cheaper.