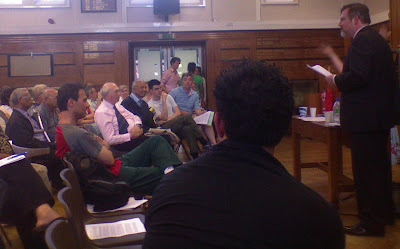 Barry Gardiner's local meeting to explain his parliamentary expenses last night veered from high drama to low farce and at times threatened to descend into chaos. Gardiner began by saying that most people would have found the current process invasive if they had to go through it, complained that all MPs were being lumped together as dishonest and that his own statements to the press had been only partially reported. He said that he believed reform was necessary and that he wanted to discuss the form this would take with constituents.

However written questions concentrated on the detail of his expenses including why he purchased his bed linen from Harrods rather than Debenham's or Marks and Spencer. The answer was, of course, that he had got it in the famous Harrods sale, so it was a bargain!

More serious questions centred on his second home and travel expenses culminating in a big shouting match about whether in 1997 he had promised to live in his Brent North constituency. Gardiner said that he had promised to live in the 'area' and not in the constituency. He claimed that his residence in Chorley Wood, was in the 'area'. At this point Cllr Paul Lorber, Liberal Democrat leader of Brent Council, who had positioned himself in the front row, jumped up and roaring above protests from the audience, said that he had been at the meeting in question and had heard Gardiner say specifically that he would live in Brent. Gardiner in turn cited the Wembley Observer's apology for carrying Lorber's original claim on the matter. When challenged that he lived in Chorley Wood because he had no no confidence in Brent schools for his children, Gardiner said that he had wanted his children educated outside Brent because he wanted to protect them from the undue pressure of being known in school as the children of the local MP.

Most of the audience seemed to be local activists and councillors from the various parties, rather than ordinary local constituents. When challenged Gardiner, controlling a tremor is his voice, said that he thought he had been a good constituency MP, declared he would not resign and that he would stand again.

In my contribution I pointed our that politicians from all parties were facing similar meetings and voiced concern that in my canvassing I had found disgust and loathing of all politicans and politics. Many people have decided not to vote at all and this withdrawal from democracy is a serious threat and opened the way for extreme right-wing parties. Barry Gardiner responded by saying that he shared this concern and wanted to engage with his constituents about the reforms necessary to rebuild confidence in democracy.

Interestingly, imperfect as it was, the meeting in a rough and ready way did show democracy and accountability in action. Public meetings used to be a regular part of our political process but over the last 30 years or so have been phased out in favour of all-ticket rallies for the party faithful. Perhaps it is a time to return to the rough and tumble and authenticity of open public meetings.
Posted by Martin Francis at 10:20:00