Teather must stand up for Brent children 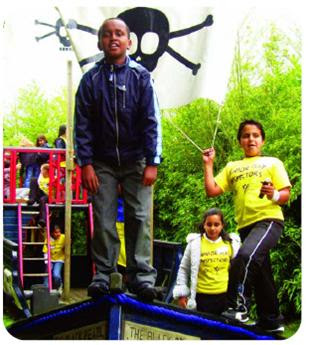 Brent children were involved in the Playbuilder consultation on playground improvements
Coalition cuts have again hit Brent children with Michael Gove's announcement of a stop on Playbuilder schemes for new and improved playgrounds. Sarah Teather, MP for Brent Central, will be under renewed pressure as Gove's cuts have already stopped building improvements in four Brent secondary schools, although articulating the Coalition's bias towards academies, he has announced that the Crest Academies building works will go ahead. Teather as 'Children's Minister' is having to defend the indefensible.
I declare an interest here.  I am passionately committed to enhancing children's opportunities for play.  Only one third of 7-14 year olds now play outside compared with 90% of their parents in their own childhoods. In our local election manifesto Brent Greens pledged a 'good local school and safe play facilities a for every child'. Play is vitally important for children's psychological, emotional, social and physical development.  I am a trustee of the Brent Play Association, a member of Play England, a governor of a primary school and run Brent School Without Walls which provides activities for children in Fryent Country Park.  I was one of the facilitators for the children's consultation which took children around Brent's play areas to put together ideas for the implementation of the government's Playbuilder scheme.  The enthusiasm of the children and the range of their ideas was absolutely amazing and inspiring.
All that is now threatened with the Department for Education's bland statement: "The coalition inherited unrealistic spending commitments for 2010-11. Play is important - but investment has to be affordable."
The council's Park Strategy makes it clear that the priority is to provide play facilities in areas where there are deficiences but one of the first areas to be hit is Harlesden and the Bramshill Road site. Two weeks ago I attended another consultation, this time at the Chalkhill Community Centre, where local residents put forward their ideas on play equipment for the new Chalkhill Park which is due toe be built on the old Chalkhill Health Centre site. Local people have already lost the Wembley Park  playing fields now occupied by the ARK Academy, will these cuts mean that they will lose their promised new park?
Posted by Martin Francis at 09:31:00