Tomorrow's Brent Executive is due to discuss a proposed emission-based charging regime for parking permits in Controlled Parking Zones (CPZs).  Currently there is no charge for vehicles below 1200cc registered before 2001 and no charge for vehicles in DVLA bands A,B and C registered after 2001. All other vehicles are £50 for the first permit, £75 for the second and £100 for the third. Visitors' permits are £100 each. The proposal is seen as a way of combating climate change and raising revenue.  In addition to the new charges it is suggested that residents could be awarded a 'permit surrender prize' and car club users could have a free permit allowing them to park in any CPZ in the borough.

The proposed new charges are set out below: 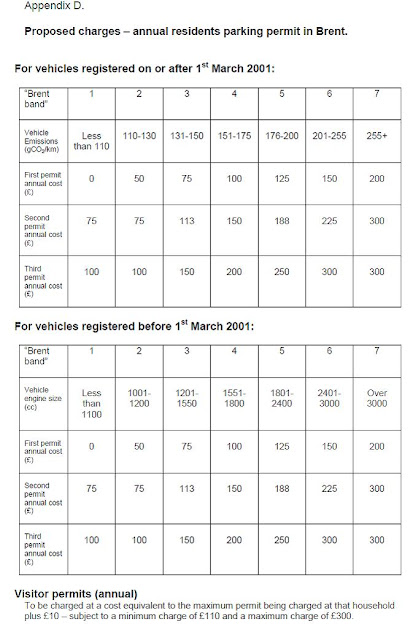 After consultation the charges would be introduced from April 1st 2011 or as near to that date as possible.