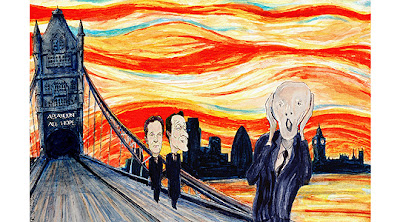 Gary Barker from Channel 4 competition
The extent of the cuts is clearly set out by the TUC in the post below. This is a message from Sarah Cox (Brent Trades Council) on a local meeting to organise against the cuts.
The first organising meeting of the Brent Campaign against the cuts launched from Brent Trades Council's July public meeting will be at 7.30 pm on Wednesday August 25th in Brent Trades Hall. This meeting is open to everyone who wants to organise against the cuts - Phil O'Reilly from Brent Unison told us that one in ten Council jobs will go, Brent Council is considering closing children's centres, moving to fortnightly rubbish collection, cutting school staff. Councillors and council officers will be spending another weekend at a country spa hotel to plan further cuts. The proposed cap on housing benefit will have devastating effects in the South of the borough where private rents are consistently higher than the cap. Families made homeless by these measures will have to be housed by the Council. The "Welfare to Work" disability assessments are harming people already. Please come to the meeting. The time to organise against the cuts is NOW.
The Trades Hall/Apollo Club is at 375 High Road, Willesden, NW10 2JR  (Dollis Hill tube - Jubilee line)
Posted by Martin Francis at 17:23:00