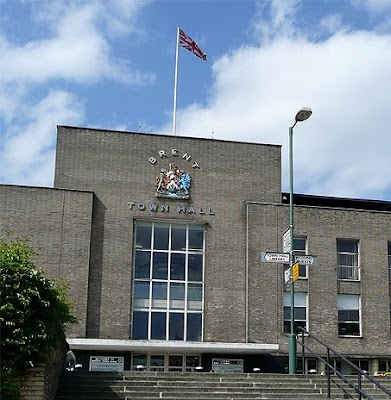 After reneging on their election promise to reconsider the Civic Centre project, the new Labour administration is now looking at the future of Brent Town Hall. At last month's Members' Question Time, Ann John, leader of the Brent Council, said that the Local Development Framework recognised that the Town Hall is a statutory listed building and that therefore the 'existing building would substantially remain'. However, there would be scope to extend the building and develop the land to the rear. John  expected staff to be decanted to the new Civic Centre during 2013 and the site made available for disposal.

Cllr John stated that capital receipts for the disposal had been built into budget for the cost of the Civic Centre and that this had been risk adjusted to taking the current economic climate into account.

Brent Greens have argued that the Town Hall should be retained for community use and Ann John said that the Council had agreed a range or combination of potential uses which would also include residential, small scale retail, a hotel and offices.  She said that a more detailed planning brief would be prepared prior to the marketing and disposal of the site.