It's YOUR Wembley - Have your YOUR say 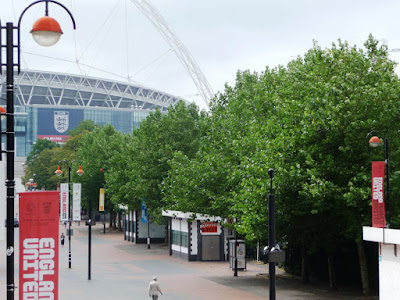 Trees on the famous  processional Olympic Way may be removed
By the time I visited on the afternoon of the last day only 120-150 people had visited last month's exhibition about the next phase of the Wembley Regeneration. This is a very small number when you think that this is the most important regeneration project taking place in Wembley and one of the biggest and most expensive in whole of London. However it was enough for Quintain, the developers, to conclude that 'a good number of people visited the exhibition over the course of six days and that the overwhelming majority of people welcomed the plans'. They will be submitting a planning application to Brent Council later this summer.
Quintain have recovered from a shaky period in  2008 when they reduced their Wembley project staff from 28 to 13. They recently agreed the sale of Pier Walk, the Transport for London building on the Greenwich Peninsula for £97m.
The exhibition was full of the pastel/line drawing artist's impressions we have seen before and it was hard to really envisage what is intended.  However I did dig out a few facts:
To be fair there are plans for affordable new homes and  they will be built to Code for Sustainable Homes Level 4. Completed commercial properties will be built to BREEAM Excellent standard and Combined Heat and Power is 'planned in linked clusters with the ability to link into a district wide energy centre in the future'. Policy on renewables even vaguer, 'Solar panels or other renewables could be included on some buildings and green and brown roofs will encourage diversity'. Quintain argue that local people will use Wembley shops in the new development and this will reduce car use as presently drive outside the area to shop. They claim that their designs will favour pedestrians over cars.

Throughout Quintain and Brent Council have argued that the redevelopment will bring benefits to local people and that the stadium area will become a local resources as well as something for visitors. The low numbers attending the exhibition doesn't suggest crowds of Brent citizens are leaping around with enthusiasm. So let's ask, "What's in it for Brent?'

Quintain would argue:
Quintain's planning  application to Brent Council will be an 'Outline' application which will establish uses, layouts, heights and access principles, with 'Reserved Matters' applications to follow with the detailed designs before construction begins. There will be consultation on this and it is important that residents respond.  Too often the public respond on general principles at the detail stage, only to be told 'that has already been dealt within the 'Outline' application'.

Quintain will be circulating 60,000 homes and businesses with a Newsletter about the scheme.You can see an on-line version of the exhibition and booklet HERE and you can e-mail your view to info@yourwembley.com or ring Quintain's Wembley team on 020 7478 9277