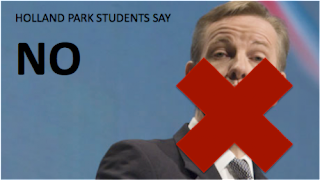 Only 20-25 parents attended the consultation meeting at Holland Park School last night - a very low attendance for a school of more than 1,000 students.  We were able to speak to the parents outside the school because the gates were locked until just before the meeting.  Some of the parents who initially felt there was 'no problem' about conversion recognised that the consultation period was short and that there was the need for an informed debate before they expressed a view.

The senior management team, dressed in what appeared to be identical charcoal-grey suits and white shirts descended on the gate like a flock of crows just before the starting time, seemingly prepared to repel demonstrators. We assured them that we were not seeking to disrupt the meeting.  Nonetheless they refused admission to an 18 year old student because he was not accompanied by his parents.  However they did accept the open letter from students.

During the meeting the school management undertook to have a second consultation meeting for students and other interested parties.  I hope to carry a report on the meeting later today.

Meanwhile a Facebook site 'Campaign to Prevent Holland Park Becoming an Academy'   LINK
and a website supporting the campaign LINK have been set up.

It is perhaps significant that a Google search for the Holland Park letter to parents produces a PDF of the letter linked to ARK, the hedge fund backed organisation that runs the Wembley ARK Academy.


The leaflet is printed below - CLICK ON IMAGE to enlarge 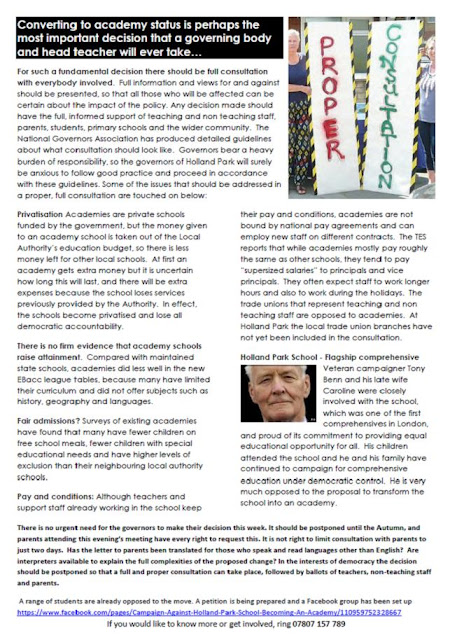 Thanks for the report Martin. Any thoughts as to why there was such a low turnout of parents?

A combination of very short notice and a letter that presented the academy conversion proposal in bland, routine, non-controversial terms I would imagine. I hope to hear more from a parent who attended.

A parent reports that there were about 50 at the meeting. This was more than I roughly calculated at the gate. I assume they may have come in a different entrance or perhaps there were staff present.

However, parents were told that the governors cannot postpone the decision because there are twenty-one of them, they are very important people and it would not be possible to get them all together again before their next meeting in November. Since the conversion to academy status wouldn't happen until 2013, what's wrong with initiating a proper consultation with plenty of notice and leaving the decision to the November meeting?