The draft West London Waste  Plan in October 2010 proposed 4 new possible sites in Brent for redevelopment for processing residual waste, as well as two existing ones . The revised list, following consultation, only includes the two existing sites: Twyford Waste Transfer Station and Veolia Transfer Station, Marsh Road. The site in Hannah Close.Great Central Way is now occupied and so is no longer proposed. Careys. the waste management company, who are contributing to the running of the Welsh Harp Outdoor Education Centre, now have an MRF (Materials Recovery Facility) in Hannah Close.  Brent Council says that the other three sites are now 'for one reason or another, considered too difficult to deliver'.  The sites were at Asia Sky, Abbey Road; rail sidings, Premier Park Road, and Alperton Lane industrial area, Marsh Road.

This will be a relief for Brent residents but Ealing does not fare so well and some of their sites are close to the Brent border.   Three existing sites are listed including one at Quattro in Victoria Road, Park Royal as well as two new ones in Park Royal (see below).

The Brent Executive will be asked to approved a revised WLWP for publication at its meeting on December 12th. Once the document has been approved by all 6 WLWA boroughs it will be made available for a further six weeks consultation in February 2012. Authority will then be sought from each borough to submit the Plan to the Secretary of State for Examination in Public. This is likely to take place in late 2012 and the plan adopted in early 2012.

In tandem with this the WLWA will be completing the selection of the new contractor for the multi-million 25 year residual waste contract. As posted previously this includes controversial Veolia who run the Marsh Road Transfer Station in Brent.

No technology has yet been put forward for the new sites, this will be done at the planning station, and environmental groups will be monitoring for any incineration or other potentially harmful processes. 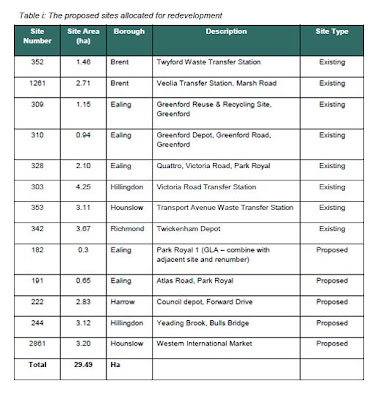