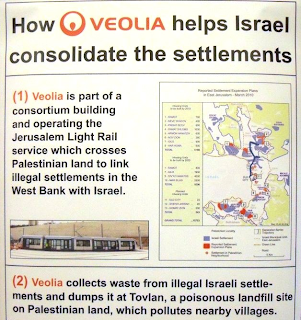 Human Rights campaigners in West London were celebrating today following the news that controversial multinational Veolia had failed to be short-listed for the lucrative 25 years residual waste management contract covering the boroughs of Harrow, Hillingdon, Hounslow, Ealing, Richmond and Brent.

More than 600 residents had written to the West London Waste Authority  requesting that Veolia be excluded on the grounds of racist practices in recruitment and grave misconduct through its active participation in violations of international and humanitarian laws and norms in the illegally occupied territories of Palestine. Last month Brent and Harrow Palestine Solidarity Campaign held a well-attended public meeting on the issue at Willesden Green Library.

Although, as is usual in these cases,  Veolia's failure to be short-listed cannot be directly attributed to the campaign, the WLWA joins a growing list of unsuccessful contract bids by Veolia.

The ground now shifts to environmental issues with the WLWA's consideration of 'solutions' submitted by the remaining 4 bidders to dealing with West London's waste.These will include possible new processing sites and environmentalists will be watching closely to see if any incinerators are planned,

Here is the statement from the WLWA website released yesterday:

Cory Environmental Ltd, E.ON Energy from Waste leading a consortium with Tata Chemicals Europe Limited with significant sub-contractor Grundon Waste Management Limited, SITA UK Ltd and Viridor Waste Management Ltd will now be invited to develop detailed solutions as the next stage in the competitive dialogue process that is being employed.

The contract involves treating up to 300,000 tonnes of residual waste per year generated by a population of 1.4 million people, and covers all aspects of treatment including any necessary transport, the operation of transfer stations, and contracts for outputs such as energy, refuse-derived fuel, recyclates etc.

Bids were invited from “single entity” companies, consortia, or joint ventures. The WLWA has offered its three waste transfer stations at Brentford, South Ruislip and Park Royal as part of the procurement but also welcomed proposals involving sites within bidders’ control or which they intend to acquire.

The next stage of the tender process will be the submission of detailed solutions by the short listed bidders in spring 2012. Two final bidders will then be selected to submit final tenders in autumn 2012. The preferred bidder will be selected in spring 2013. The new services will start in April 2015, but WLWA is exploring with bidders the opportunity for an earlier start to begin diversion from landfill as soon as possible.

West London already recycles or composts almost 40% of its household waste, more than any other sub region of London. The new contract will allow continued flexibility to increase recycling up to at least 50% by 2020 and WLWA will focus even more on waste minimisation schemes in the future.

Veolia's contract with the London Borough of Brent ends in 2014.