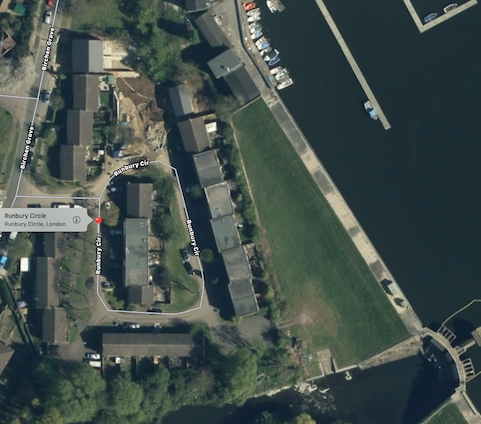 
The Welsh Harp Reservoir – a warning from Whaley Bridge
We know that Global Warming is causing more frequent extreme weather conditions, such as record heat waves in summer, and more intense storms. In the past few days, we have been watching (from a safe distance) the news about a threatened dam collapse at Whaley Bridge, caused by the volume of water flowing into the reservoir above the town after prolonged torrential rain. I don’t want to cause alarm, but this should be a wake-up call about a reservoir much closer to us.
The Toddbrook Reservoir in Derbyshire was built in the 1830’s, to supply water along a “feeder” to the High Peak Canal. The embankment dam was constructed of earth, around a central core of puddled clay.
The Kingsbury, or Brent, Reservoir (now better known as the Welsh Harp) was built in 1834/35, to supply water along The Feeder (which still runs through Neasden and Stonebridge) to the Paddington Branch of the Grand Junction Canal. Its dam, using the same method of construction, was the work of a Hammersmith contractor, William Hoof. The price for the work, which he agreed with the Regent’s Canal Company, was £2,747 and six shillings! 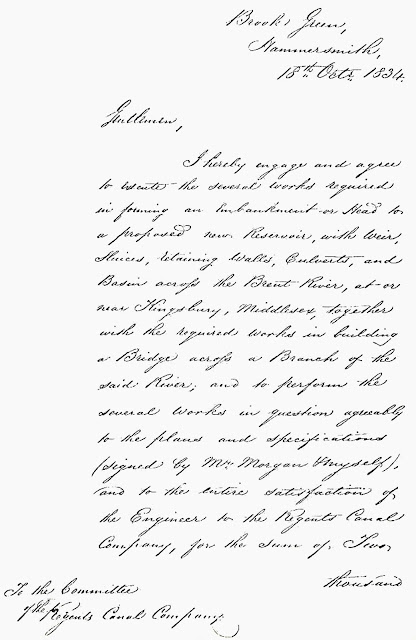 William Hoof’s letter of 18th October 1834, agreeing to build the reservoir and embankment dam at Kingsbury.
Heavy rain, and a rapid thaw of snow, caused a partial collapse of the dam in January 1841. 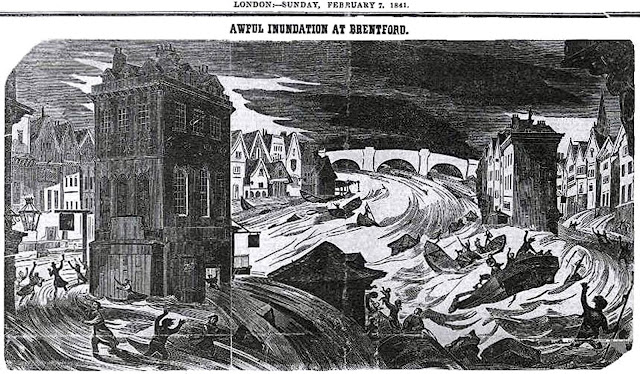 A newspaper illustration of the flooding in Brentford, 1841.

The water swept down the Brent valley, which was then just open farmland, and caused major flood damage at the canal port of Brentford, where the river met the Thames. Several people were drowned, and more than 100 boats were wrecked.
The dam had been repaired by 1843, and was enlarged ten years later as the Regent’s Canal Company needed more water for its operations. A spillway was added to the dam, allowing excess water to escape into the river below when the reservoir was full. By late Victorian times, this had become a tourist attraction for people visiting the local countryside from the crowded city. 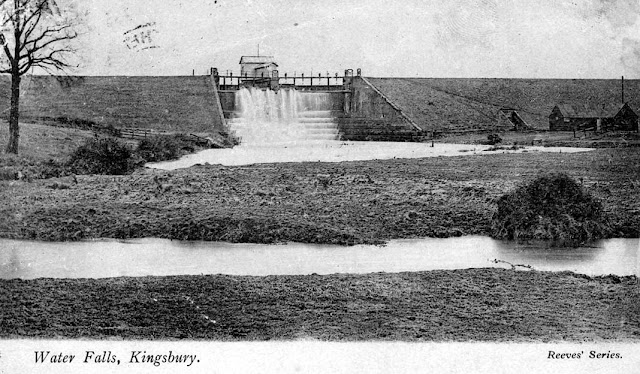 The Kingsbury “waterfall”, in a postcard from c.1900.  [Brent Archives online image 1341]
The land downstream of the reservoir remained as farmland until 1880, when the Metropolitan Railway built a large engineering works at Neasden, on the line they were building out from Baker Street. They also had to build homes for the many people needed to run the works, and the first 100 houses in “A” and “B” (now Quainton and Verney) Streets were occupied by 1882. If you want to learn more about Neasden’s Railway Village, there is an illustrated article on the Brent Archives website LINK .
Across Neasden Lane (North), suburban development in the 1930’s saw new roads such as Braemar Avenue built right up to the foot of the dam, and a new junior school, Wykeham Primary in Aboyne Road, to serve the area’s growing population. Two more schools, Neasden High and St. Margaret Clitherow R.C. Primary, were built in the early 1970’s, on the site of the former Neasden Power Station, between the River Brent and The Feeder. When the High School closed, as part of Brent’s cull of secondary schools in 1989, its site was redeveloped as the Quainton Village housing scheme.
More housing developments were built near the reservoir in the late 20th century. Runbury Circle nestles under the north-west edge of the dam, while Harp Island Close lies between the river and The Feeder, near to where the Brent emerges below the dam. This estate of 128 flats was built by Laings in the 1980’s, and the view here is from its gardens (in 2009). 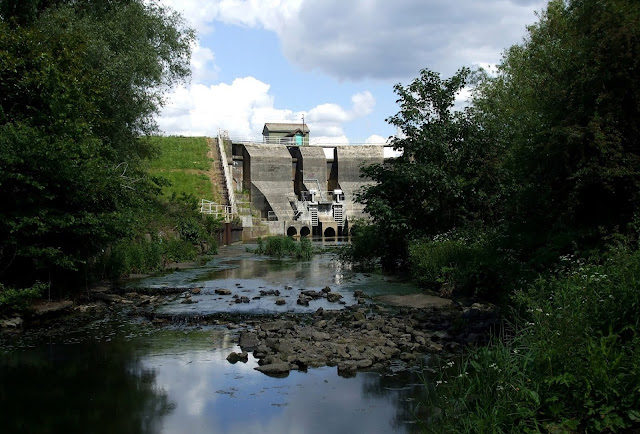 What had been the dam’s Victorian spillway was replaced in 1936 by five siphons, designed to take water out of the reservoir if its level becomes too high. These were installed as a safety measure, under changes introduced by the Reservoir (Safety Provisions) Act in 1930. That law was introduced after 16 people were drowned in Dolgarrog, North Wales, in 1925, when floods coming down a valley in the hills caused an embankment dam above the village to collapse.
Toddbrook Reservoir had been inspected, both by its owners and an independent engineer, under the provisions of the current (1975!) Reservoirs Act, as recently as November 2018, and found to be “safe”. In the light of the near collapse of its dam, less than nine months later, and what we know about more extreme weather events, as a result of Global Warming, we need to think again about the safety of all of the country’s Canal Age dams, including the one at the Welsh Harp.
Brent Council needs to work with the Canal and River Trust, and the Environment Agency, to review all aspects of our local dam’s safety, both to minimise the risk of a similar event to Whaley Bridge happening here, and to ensure that plans are in place on how any such emergency would be dealt with.
If a similar spell of very wet weather hit North West London, as it did North West England last week, the wide catchment areas of the Dollis Brook / River Brent and the Silk Stream would bring huge volumes of water into the Welsh Harp. Not only the safety of the dam structure in such conditions needs to be properly assessed, but also the ability of the siphons to cope with such volumes.
If the reservoir had to shed large volumes of water, could the river below the dam take that water away safely, without flooding low lying residential areas and roads for several miles downstream. There have been times, in living memory, when debris restricting the culvert which channels the river under the Harrow Road has caused flooding in the Monks Park and St Raphael’s Estate areas.
Are Brent’s own maps of areas at risk from flooding, if there were to be a partial (or worse) failure of the dam up to date? Does the Council know how many people currently live, work or go to school in these areas, and how it would manage their evacuation if there were to be an emergency of the type experienced at Whaley Bridge. The recent events there have been a warning which must not be ignored. 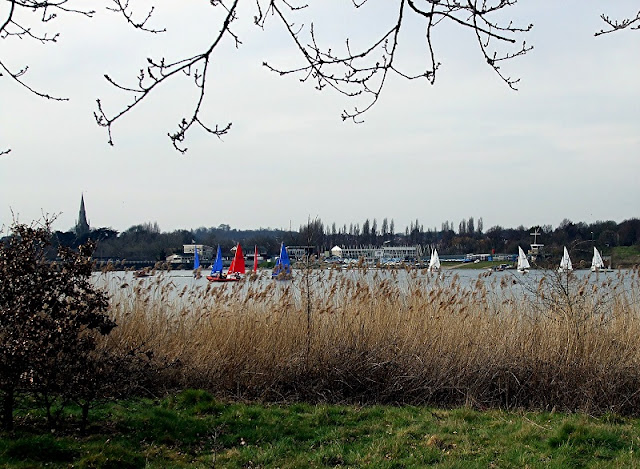 Despite this warning, the Welsh Harp Reservoir is still a place to be treasured and enjoyed, rather than to be feared, as long as its potential dangers are properly considered, and the necessary action taken. If you want to discover more about its history there is an article online LINK t, or for more of its fascinating story, beautifully illustrated, borrow a copy of Geoffrey Hewlett’s “Welsh Harp Reservoir Through Time” from one of Brent’s libraries. Better still, take a stroll beside it yourself!
Philip Grant.