Because of the crowds coming to the F.A. Community Shield match at Wembley Stadium this week-end (Sunday 4th August), the barriers around the work being carried out in the Bobby Moore Bridge subway have been removed. It was possible to get a closer look at the work in progress, to cover up most of the tile murals with illuminated advertising panels.
First, the good news! For the first time since October 2013, residents and visitors can see the mural scene showing England footballers and the old “twin towers” Wembley Stadium, including the plaque unveiled by Bobby Moore’s widow, when the subway and murals were opened in September 1993. 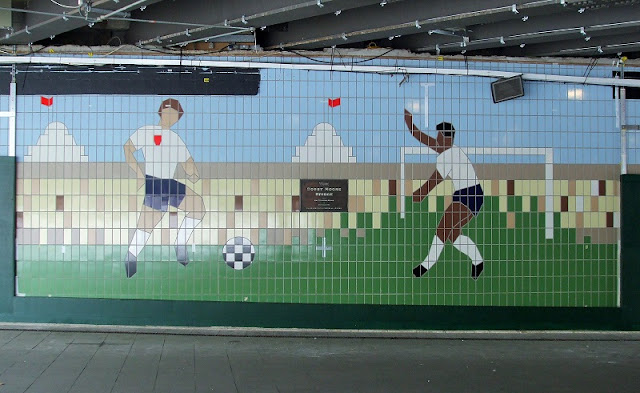 This mural scene will continue to be on view in future. That was the only concession which Quintain were willing to make, in response to the call made jointly to them and Brent Council, by Wembley History Society in April 2018 LINK, to put ALL of the tile murals back on permanent public display. 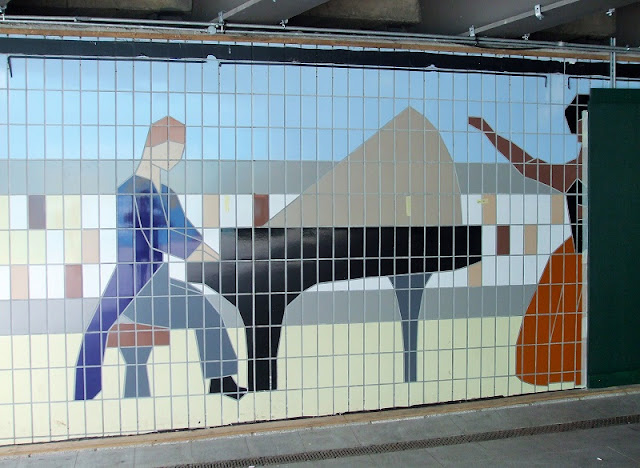 The work on the west wall of the subway has already put a permanent covering over two thirds of the mural scenes, but two were visible on Saturday. The scene of a pianist accompanying a concert singer, had already been partly covered, so that it is difficult to identify who the female vocalist is (possibly Shirley Bassey or Whitney Houston?). If anyone knows the answer, or has another idea, please share it in a comment below! 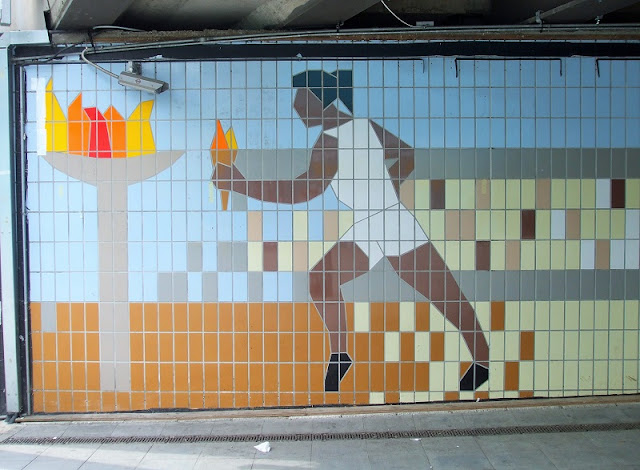 At the south end of the subway’s west wall, the mural shows another scene from the Olympic torch relay, this time with the flame which burned at the Stadium throughout the 1948 Games. Together with the torchbearer and Olympic flag scene at the entrance to the subway, they were designed to welcome visitors to Olympic Way, the great “processional route” to the “Venue of Legends” that is Wembley. Both scenes will soon be covered over with illuminated advertising panels, perhaps never to be seen again. 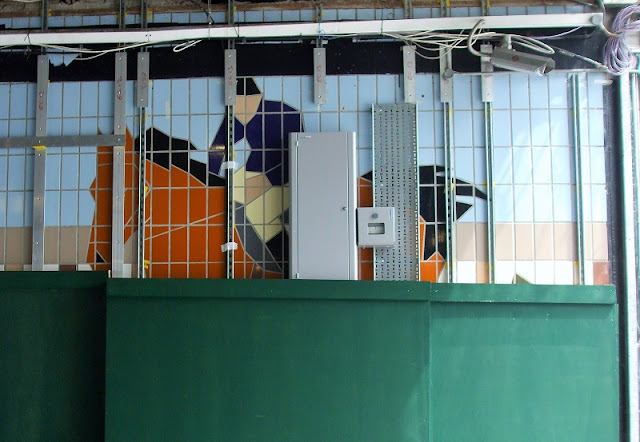 As shown in the previous post (Wembley Park’s tile murals – now you see them – soon you won’t! LINK), the work to fix the illuminated panels was not meant to cause any damage to the tile murals. However, some of the electrical equipment already fixed over the 1948 Olympic show jumping mural scene appears to have damaged the tiles beneath. How much more of this heritage asset are we going to lose, before Quintain have finished their work on OUR Bobby Moore Bridge tile murals?

Brent's Heritage Officer is also concerned about possible damage to the mural caused by fixing the electrical equipment, and will be visiting the site to check.

I fear damage has already been done.

I have heard back from Brent's Heritage Officer, who inspected the work on the murals yesterday. e will continue to monitor the work.

It seems that, despite appearances, all of the new metalwork has been fixed only into the grout lines, with a special type of bolt which should do less damage than a normal screw into a plastic plug. There are said to be rubber pads between the electrical box(es) and the tiles, in order to protect the murals.