Brent Battles to Save the NHS

We had a very positive reception from the public at Northwick Park Hospital when leafleting about the public meetings and demonstration in  support of the NHS  (see below). Those most concerned were the elderly, who stopped to talk to us about their concerns that some services would be cut and waiting times  increased, and parents of whose young children needed high quality treatment and continuity of care. The role of private companies, 'they are only in it for the money and not for us' was one comment, was a major focus.

It was significant that the elderly had been around before the birth of the NHS and recognised its achievements. They also acknowledged the gains that had been made in terms of waiting lists and quality of care over the last decade or so and knew what they might lose. When they saw 20-30 year olds refusing the leaflets they remarked that they were a generation that took the NHS for granted and didn't realise what things used to be like and what they stood to lose. 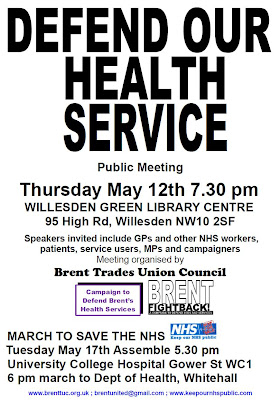 Click on image to enlarge
Brent Fightback will be leafleting in Central Square, Wembley (next to Wembley Central Station)  this afternoon between 1pm-3pm and will organise further leafleting for the demonstration at the public meeting on May 12th.  Further information from: brentunited@gmail.com or check out Brent Fightback on Facebook.
Posted by Martin Francis at 10:34:00