The Big Crunch on Climate Targets 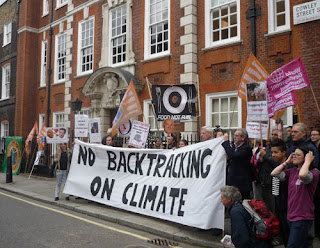 As the government's position on climate change targets remained confused after differing reports over the weekend, protesters gathered outsiide Lib Dem Head Quarters at 8am this morning to deliver the following letter to Nick Clegg:


We in the Campaign against Climate Change organised a demonstration outside your party headquarters on hearing the news that there could be a risk that recommendations of the Committee on Climate Change might not be accepted. We are still dismayed at the position reportedly taken by Vince Cable on this issue.
However we are relieved to hear that the government has now decided to accept the recommendations of the independent committee for the 2023-27 carbon budget – because to allow short term economic considerations to take precedence over the Committee’s recommendations at this stage, would have set a precedent that could have effectively undermined the whole of the UK’s emissions reduction program.
Nevertheless we feel it will be a big mistake to disregard or delay acceptance of the Committee’s recommendation for a cut of 60% by 2030 (we would say at least) and even more important the recommendation to tighten up the nearer term targets (2013 to 2023) because above all we need strong action as soon as possible.
Further to that we would like to take this opportunity to warn you that the recommendations of the Committee are still in themselves insufficient, and to demand yet more robust action on climate. We appreciate how difficult this is to achieve politically but we believe there can be nothing more compelling than the spectre of a climate catastrophe that could kill billions. Our reasons for believing that the recommendations of the Committee are inadequate include three main considerations.
First, the recommendations include an increase in agro-fuels – that is biofuels produced through intensive agriculture. Already the increased demand for agrofuels is boosting the rate of deforestation and destructive land use change in Indonesia, South America and other places. In climate change terms we believe the increase in use of agrofuels will do substantially more harm than good. So called sustainability criteria are ineffective and probably unworkable on the real world.
Second, the Committee do not take into account the UK emissions that have effectively been outsourced to countries like China as they feed our increased demand for consumer goods.
Third, the targets enshrined in the Climate Act are now themselves, inadequate in the light of the latest climate science and represent un an acceptable level of risk. There is a good chance they would be insufficient to prevent a catastrophic destabilisation of global climate that would be devastating for human populations around the world, especially, and most immediately, the poorest and most vulnerable. This is the clear implication of those at the sharp end of climate change research like Professor Kevin Anderson of the Tyndall Centre who suggests that we should be aiming at something more like a 10% cut in emissions per year1, or Doctor James Hansen who heads NASA’s research effort on climate change and who says that two degrees of warming represents too great a risk.

We could add to that a fourth, namely that the international situation around the climate negotiations currently looks bleak, so that there is an even greater need to set a conspicuously bold example to break the deadlock and move things forward.
We therefore believe that the quite unprecedented situation that we find ourselves in amounts to a global emergency and requires a quantum leap in the scale of our response, over and above what the Committee on Climate change are currently recommending. The Campaign against Climate Change, for instance, are calling for an end to agro-fuel use, ten per cent cuts in emissions per year and a more or less fully decarbonised economy in a “Zero Carbon Britain” by 2030.
To do any less is still to court disaster.