Why is Fryent Way closed all day on Saturday? 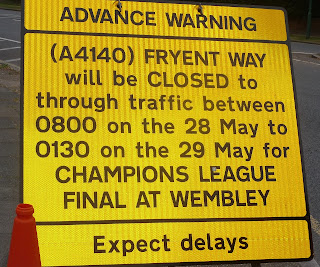 This is the question I have been asked a dozen times over the weekend by local residents. The advance notice on display at either end of Fryent Way says that the closure is due to Champions League Final at Wembley Stadium. This has left many puzzled because it has never been closed before for major matches. It turns out that it will be used as a coach park


One of the world's greatest football events comes to Wembley on Saturday 28 May. The UEFA Champions League final between Barcelona and Manchester United takes place at Wembley Stadium.

Over 20,000 Barcelona fans are expected to attend the evening match.

We were one of the partners in the successful bid in 2007 to bring the event to Wembley and we have an obligation to ensure that it is a successful, safe and enjoyable celebration.

Due to the timing of the event and the travel arrangements for supporters, it will be necessary to close Fryent Way to traffic on the day of the final.

This will be in addition to traffic management arrangements that are put in place in Wembley on event dates.

The road will be closed from 8am until around midnight to provide vital coach parking.

While the closure is in place the recommended, and signed, diversion route for traffic will be via Kingsbury Road, Church Lane, Tudor Gardens and Salmon Street (part) or Forty Lane.

Access for local residents from Fryent Way will be maintained up to the junction with Broadview from the north.

Fryent Country Park will remain open throughout the period of the road closure.

I hope the Barcelona fans infect the local population with a touch of the revolutionary fervour we have seen in Spain in recent days!
Posted by Martin Francis at 17:57:00