NHS is for public service - not private profit 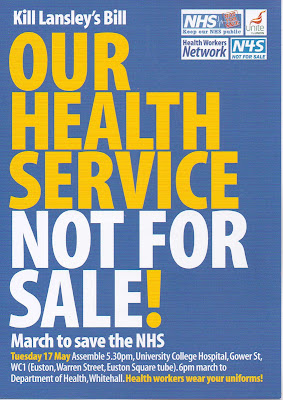 About 60 people attended Thursday's Save the NHS meeting at Willesden Green library and many were genuinely shocked when they heard about the proposed changes and their repercussions.
Dr Ishani Salpadoula from the Kilburn Park Medical Centre tol for which they are financially rewarded. They had been organised in clusters for three years with the aim of improving performance by working together and improvements had resulted. She said that GPs were therefore some way along the government's route already but this was because GPs were 'practical people' - they were not committed to privatisation.  She said, 'GPs are not bad guys, but they are not politicised'. Although the government emphasises 'choice' the public are not being given what they asked for. Patients want their own GP who will see them in timely fashion.
Dr Ishani said that if the changes were pushed through fragmentation through privatisation and external  proviers will result and 60 years of networking between hospitals, mental health, district nurses etc would suddenly change. Patients and GPs would find themselves dealing with agencies and communication would be difficult and the system much more complicated for patients.
She said there was nothing GPs could do without having the patients behind them. She urged the audience to see their GPs and tell them what they want - including accessibility and familiarity.
In discussion one member of the audience said that what he wanted was for GPs not to be taking part in the commissioning meetings at all but to be challenging the changes GPs were trained in medicine and that is what he wanted them to do - not run businesses. Dr Ishani said that surgeries should be holding meetings with patients to ascertain their views but there was no way one GP could contact 7,000 people on his or her books. Meetings tended to be advertised in surgeries and the information only seen by 'active' patients. There were suggestions from the audience for public meetings in the cluster areas for all patients. One speaker said that there was little democratic control over the NHS already but the proposals would make things even worse and the new system was utterly opaque. There was general agreement that residents should go to their GPs and find out what consultation was planned and ensure their voices are heard.
The meeting heard that a private company was already doing triage at Central Middlesex A and E and there was potential for hiving off services such as physiotherapy, speech therapy and mental health services at the beginning of the process. One speaker emphasised that the role of health professional was vital - if professional don't cooperate the new system won't work.
Navin Shah, Assembly Member for Brent and Harrow told the meeting about his attempts to raise the issue in the GLA, He said PCTs had their problems but they were better than non-accountable private quangos. . He'd  had no response to his questions about local monitoring and auditing. A multi-disciplinary London Improvement Board would be set up and 3% of the London government grant will go to that body. Shah said he though that body should be government funded - not reduce local money available to health. He went on to say the if the reforms don't work health inequalities would increase.
Jim Fagan from Keep Our NHS Public said it was  important  to fight the reforms in London: 'If they pacify London they've got the NHS'.

Much more was said than I can report. Videos of  the speakers and the contributors are available on Brent Greens' blog HERE
Those attending the meeting and readers of this blog are urged to join the March to Save the NHS assemble 5.30pm Thursday 17th May at University College Hospital, Gower Street WC1 (Euston, Warren Street, Euston Square tubes) to march on the Department of Health in Whitehall. Health workers should wear their uniforms.
Posted by Martin Francis at 20:48:00