Chalkhill growing its own, but 'Where's our park?' demand the children

Greens have long pressed for the opening of more allotments on derelict or unused land so we welcome the Chalkhill allotment project initiated by Metropolitan Housing and supported by Brent Council Ward Working.
Allottees have now got their raised beds which are made from builder's type heavy duty bags. The plots are on the old walkway between the Metropolitan railway line just outside Wembley Park station and Chalkhill Road. The project is part of the MHT's 'Grow Local' project. LINK

I spoke recently to some of the new vegetable growers and they were very positive about the experience and told me how excited their children were at growing their own. They have been given free seeds as part of their 'starter pack' and tomatoes, peppers and corn are already in evidence (cross fingers over the possibility of a cold snap!).  One slight drawback at the moment is that there is no piped water on the site so plot-holder have to bring in their own. The combination of the recent very dry spell and the nature of raised beds means that a lot of watering is required at present.

In contrast another green project at Chalkhill seems to have ground to a halt. At the recent Kingsbury and Kenton Area Forum I asked when work would start and am awaiting a reply from the Council.. I was assured last summer that funding for the new park was safeguarded despite government cuts. Work was supposed to start late last Autumn but was delayed, according to the Council, by the unusually harsh weather. When work didn't start in the early Spring I heard that there was a 'labour shortage'.

The site, as you can see below, is developing into quite a wildlife area and fencing has been broken down in places. As with any such site, fly-tipping is becoming a problem and it is rather a dismal sight for local residents whose children have been badgering me asking when they are going to get their park. 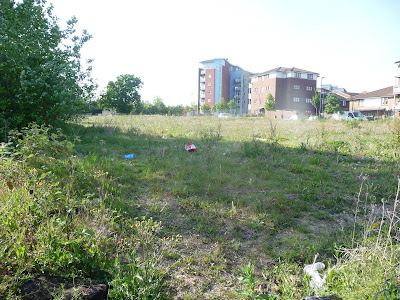 Unless something revolutionary happens quickly there will be no park in place for the children's summer holiday which is really a great shame for children in a high density development with many flats without any garden and where the terraced houses have only very small gardens..

Declaration of interest: I am Chair of Governors at Chalkhill Primary School
Posted by Martin Francis at 17:20:00