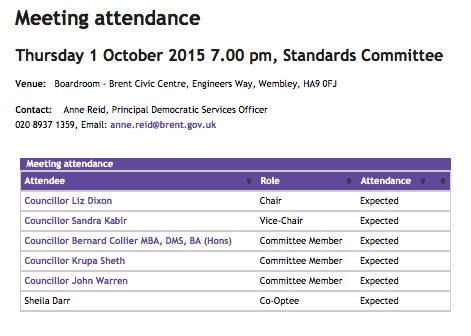 The Agenda for the October 1st Meeting of Brent Standards Committee LINK  has now been published and surprisingly does not include any reference to the case of Dr Helen Carr, nor a referral made by Philip Grant.

On September 18th Philip Grant wrote to the chair of the Standards Committee:

I am writing to you in your role of Chair of Standards Committee.

On 18 June 2015 I wrote to Brent's Monitoring Officer to complain of multiple breaches of the Members' Code of Conduct by one of Brent's elected councillors. I have since made further allegations of breaches, or potential breaches, of the general conduct principles in the Code by the same councillor.

I would be grateful if you would liaise with the Monitoring Officer, please, to ensure that this matter is referred to Standards Committee on 1 October 2015, so that your committee can decide whether the alleged breaches should be investigated. Thank you.Best wishes,

I expect we will hear more of this.

Was Helen in breach back in June?

Following correspondence between myself and the Monitoring Officer, copied to Brent's new Chief Executive, a way forward for dealing with this matter has been agreed.

Although my allegations of breaches of the Members' Code of Conduct, by one of Brent's elected councillors, will not be referred to Standards Committee at their meeting on 1 October 2015, the matter will be reviewed by an independent person in early October. If that person advises that the actions by that councillor, which I have complained of, do represent potential breaches of Brent's Members' Code of Conduct, then my allegations will be referred to Standards Committee, probably at a specially arranged meeting.

Keep up the good fight.

Any chance in adding a few more names to the list as the conduct of a considerable number of councillors and officers has clearly been highly questionable since the Cronies took over the leadership!?