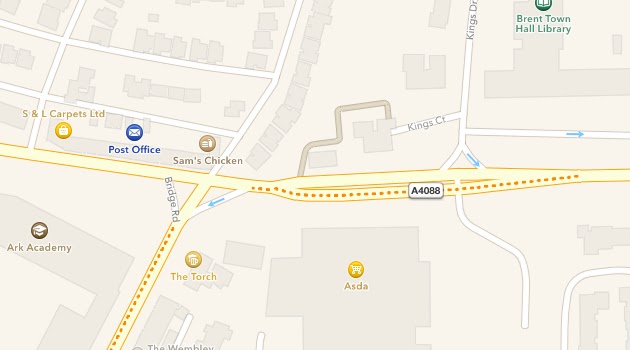 In a much wider discussion about transport improvements in Brent the Cabinet last night discussed the problems in the Forty Lane corridor (Forty Lane/Forty Avenue is the main road going across the centre of the map above). You can see my video of the problem at the Kings Drive/Asda junction HERE.

Cllr Pavey, speaking in his Barn Hill ward councillor role, acknowledged that the issue was dealt with as a long-term objective through a preliminary design process in the ILP but was concerned that given the number of accidents recorded it had not been addressed much earlier.

Cllr Southwood, the Lead Member for the Environment, said that this a TfL responsibility but that a shorter term alleviation may be possible - there may be other ways of looking at the problem. She went on to say:


The safety of people on our roads is an absolute priority for the Council.


...immediate action to discourage motorists contravening the traffic regulations at the junction of  Kings Drive and Forty Lane. we shall therefore review the existing signage and road markings to improve compliance and this will include the introduction of camera enforcement signs along with increased enforcement during peak hours to target habitual offenders.

Meanwhile earlier yesterday a resident emailed me to say that what was recorded on the video was an example of what she was seeing daily. She went on:


This morning – I’m sorry, I know this is probably getting boring but I’m so frustrated – many people, including students from Preston Manor, got off the bus at the stop outside Asda on Forty Lane.  They then continued their journey across the junction by the Torch towards Forty Avenue – this involves crossing against traffic in two lanes from Forty Avenue on a left turn only down Bridge Road to the first pedestrian island, then across one lane for traffic turning right from Forty Avenue or straight across Barn Hill, and then across two lanes of traffic from Bridge Road turning right into Forty Lane, and then across one lane of traffic turning left from Bridge Road into Forty Avenue.  As I stood to cross over Forty Avenue towards Wembley Park station at 08.10 two cars from Forty Avenue jumped the red lights, blocked the box junction, and then continued on down Bridge Road against the green man pedestrian light with people trying to cross.

Again, there are students, school age children, using these crossings where I, with 50+ years of experience as a pedestrian and 30+ years as a car and motorcycle user, have trouble crossing.

In an email to Cllr Pavey ahead of the Cabinet Meeting I wrote that there was a real possibility of a fatality if the problems were not addressed. He agreed.

Cllr Southward should not try and pass this off to TFL, the council have a responsibility.

This situation is of very great concern and something needs to be done sooner rather than later. All this Council seems to be doing is passing concerns from one person or department to another with no decision or action being taken. It is anticipated that similar difficulties/concerns with traffic and pedestrian safety will occur once Wembley High expansion is completed with the extra 840 pupils being dropped off and entering the school along East Lane, an already highly congested road. Road safety appears pretty low down on the Council agenda.

When La Lycee applied for planning permission there would have been a Section 106 agreement, and also a traffic assessment. So, the S106 monies ought to be both available and earmarked. Sandor Fazekas is a very competent officer indeed, so I'd hope he'd act. I'd also hope someone has flagged it to Brent Police traffic unit. They quite like nicking people. Southwood is quite wrong to infer that nothing can be done if it's a TfL road.

Martin - I'm distraught to find there was a hit and run this afternoon involving a 12 year old child.

Thanks for the information. I knew about the accident but not that a child was involved. Nothing on BrentMPS. Do you know if s/he is ok?

From My London: A young boy is fighting for his life in hospital after a hit-and-run in Wembley .

The 12-year-old is in a critical condition.

Police were called by the London Ambulance Service (LAS) on Friday, September 13 at 4.07pm to the collision on Forty Avenue.

Officers attended and found a pedestrian, a 12-year-old boy, with serious injuries.

He was taken by the LAS to a North London hospital where he remains in a critical condition.

His next of kin have been informed