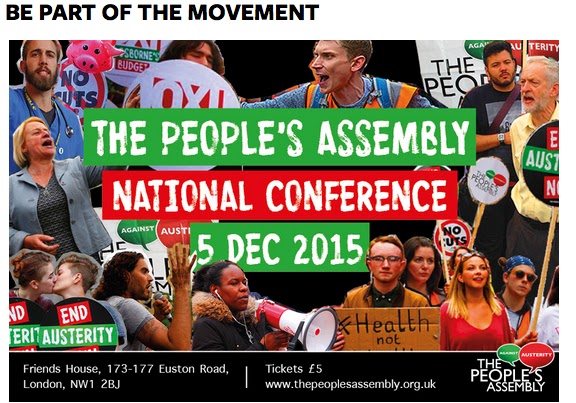 This looks like a good start. It is absolutely indisputably obvious (Donald Trump aside) that if every council in the country refused to set a 'legal' budget, the government would climb down. If only the Labour councils did it, they'd climb down. If only some Labour councils did it, they'd climb down. Poll tax opposition was not a majority movement. Nor was tax credits. But, as with any action, people need to feel secure and confident before they take it, and that requires solidarity, simultaneity and organisation.
Governments, like any powerful minority, operate on bluff bolstered by claims to electoral legitimacy. Given that only 36% of the electorate voted for a manifesto which, in any case, didn't include (or actually positively denied) any intention to do what they're doing, this lot have sacrificed any claims they have on that count. The People’s Assembly calls 5 more years of such cuts ‘unsustainable’ . I’m not sure that’s the word. People can get used to anything and come to regard it as ‘normal’. It CAN be sustained. The question is whether we SHOULD get used to this country being run like a squalid little 1950s Third World gangster-state descending into an ever-greater contrast between private wealth and public squalor.
There’s also the matter of whether your average councillor is up to the challenge that the government has thrown down. How many of them even have much sympathy with the principles and beliefs behind the opposition to the cuts? Or even understand what they are?
Still, good start.

Is there a report anywhere of what happened at the People's Assembly conference? I can't find one.