Brent to save £0.45m annually by letting large sections of parks turn into meadow land

I can reveal that large sections of Brent parks which are currently lawn will be turned into 'meadow land' as a result of changes in the Council's contact with Veolia. The reduction in maintenance will produce annual  'savings' of £450,000.

In response to my query about the policy an officer gave this response:

I'm unable to provide maps for all the affected parks at this stage as we're currently updating all of them but a list of sites is provided below:

I can confirm Veolia will continue to maintain the sites as part of the Council’s Public Realm Contract.  The current plans are to allow the various grass species to grow, with the meadow areas being cut once a year in order to prevent self sett trees, brambles, etc. taking hold.  Grass cuttings will be collected as part of this.

The case for creating wildlife havens was not the specific subject of any committee reports; they are covered as part of the need to achieve contract savings in 2017/18 as agreed under item 7 at the Full Council meeting on 27 February.  Further details, including minutes of the meeting, are available on the Council’s website

The changes are part of a £900k cut. The Officer's budget report stated:


Any change in operations may be noticeable to residents used to familiar and established work practices. However, these changes are specifically intended to improve environmental standards overall.

Officers have made an attempt to justify the change on environmental grounds:

These grass meadow areas will now be cut once per year as part of a number of programmes that aim to make the borough cleaner and greener.  Letting the grass grow aims to create wildlife havens, increase biodiversity and reduce carbon emissions. This programme will be supported by the launch of the Brent Wildlife Watch website later this summer. All parks will retain some areas that will be kept maintained in a traditional way.

There has been no public consultation about the change and no reports by specialist horticulturalists or biodiversity officers that could be scrutinised by councillors of the public. These are changes that will change the appearance of our parks substantially.

Brent does have meadow land at Fryent Country Park (actually certified organic) and the Welsh Harp Open Space but these are long established - turning formal lawns into 'meadow' just by letting the grass grow long  is a different proposition. It does does not create an environmentally friendly wild flower meadow of the type that can be seen at Westminster University, Northwick Park.

It is noteworthy that despite the claim that 'wildlife havens' will be created there is no mention of wildflowers, a vital component of such havens. Proper wildflower meadows have to be created and diligently maintained as this publication from Newcastle City Council states LINK 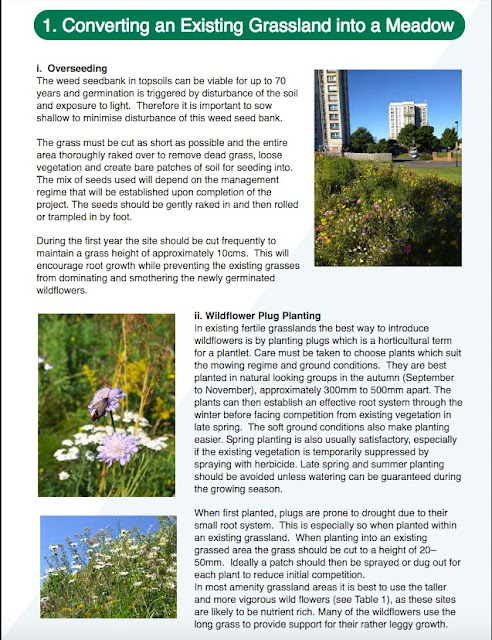