How to support the McDonald's strikers #McStrike 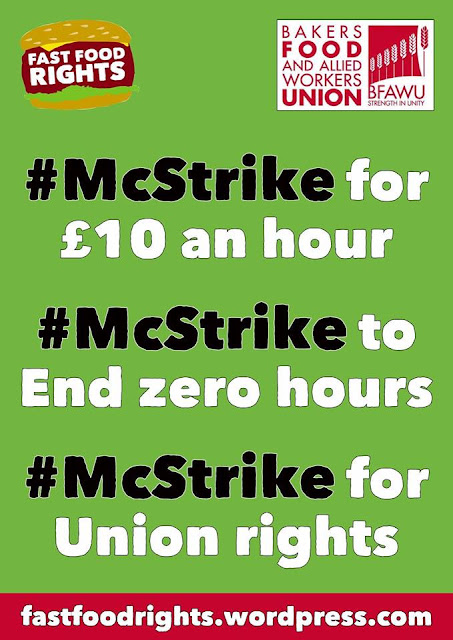 McDonald’s workers balloted at Crayford (south east London) and Cambridge stores have voted by an incredible 95.7 percent for strikes, and their BFAWU bakers’ union has now named Monday 4 September as the first strike day.

A strike committee of workers met and decided to go for the date for their historic action–the first ever strike at McDonald’s in the UK.

The workers taking this bold step need the URGENT solidarity of the wider trade union movement. Please give generously now to their strike fund HERE

Please also rush messages of support, encouragement and solidarity for the workers to fastfoodrights@mail.com

Already, just by voting to strike and organising in the union, the workers have gained an impressive shift from McDonald’s–who have stated only now after the strike vote that by the end of 2017 they will implement the twice promised offer of a guaranteed hours contract to every UK McDonald’s worker. The workers and BFAWU rightly want this signed off, but it is a major victory for the some 80,000 workers at McDonald’s and shows what getting organised, joining a union and taking action can do.

The strike remains on, over a number of grievances at the two workplaces, and the workers are also fighting for £10 an hour minimum wage now, union recognition, and for the demand on scrapping zero hours contracts to be implemented.

What’s happening and how you can support?

Pass this #McStrike MODEL MOTION to back the strike

Give urgently and generously to the #McStrike Fund

On the Saturday before the strike, 2 September, BFAWU is holding a protest at McDonald’s HQ in East Finchley, north London. We are calling on solidarity from the wider movement on this day, with banners, collections etc, brought along in support. Join and share the Facebook page for the protest HERE.

The strikers and their supporters will then come together outside parliament at 10.30/11am for a rally, speakers include Jeremy Corbyn and John McDonnell. Stay posted for details of what will be happening after the rally. We are asking for maximum support possible with banners and supporters gathering at the rally, and for local activists and anyone who can to show their support at picket lines where possible too.

LONDON
McDonald’s @ King’s Cross / Pentonville Road
At lunchtime, 12PM-2PM, there will be a McStrike solidarity demonstration with friends and comrades from different unions and community campaigns across Central London. It will be outside the McDonald’s in King’s Cross (302-304 Pentonville Road, Kings Cross N1 9XD). Come along to show some solidarity, to inform workers, customers and passers-bys about the strike. Together we can make this strike powerful in our communities too, and let McDonald’s workers know there is a strong movement with them! Join the Facebook page for the event HERE
Posted by Martin Francis at 11:10:00