Detectives are appealing for witnesses after three people were shot in Brent on Monday evening.

Police were called to Dog Lane, NW10 at 19:01hrs on Monday, 15 August following reports that a person had been shot.

Officers attended and found a 17-year-old male with a gunshot wound.

Two further victims – a 21-year-old man and another man believed to be aged in his early 20s – were found nearby.

All three males were transported to hospital. The 17-year-old’s injuries have been assessed as non-life changing, the 21-year-old has a potentially life changing injury and the man believed to be in his early 20s remains in a serious but stable condition.

Police firearms officers responded as part of the incident. The suspect/s had fled prior to their arrival.

They provided emergency first aid to the victims until the arrival of paramedics.

An investigation is under way. At this early stage there have not been any arrests.

Anyone with information should call police on 101 with the reference 6551/15AUG.

Information can also be provided to Crimestoppers, anonymously, on 0800 555 111.

A S60 (Section 60) has been put in place in some Brent wards (Stonebridge, Dollis Hill, and part of Welsh Harp)  after the Neasden shootings. 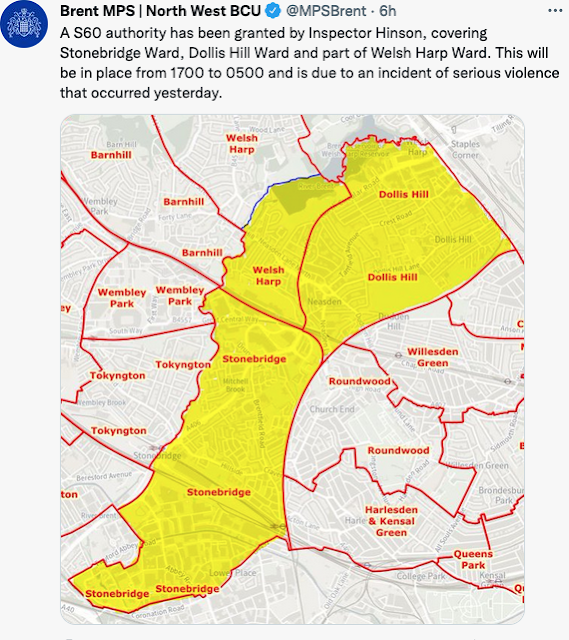 A Section 60 is a power given by an Inspector or above which allows police officers to stop and search anyone in a specific area without needing to have reasonable grounds.

It is granted under Section 60 of the Criminal Justice and Public Order Act 1994.

Why are Section 60s put in place?

A Section 60 is put in place if an Inspector or above believes that people will be:

in a particular area.