Further key questions for Brent Council after Brent named as one of the places polio virus found in waste water. Children 1-9 to be offered boosters. 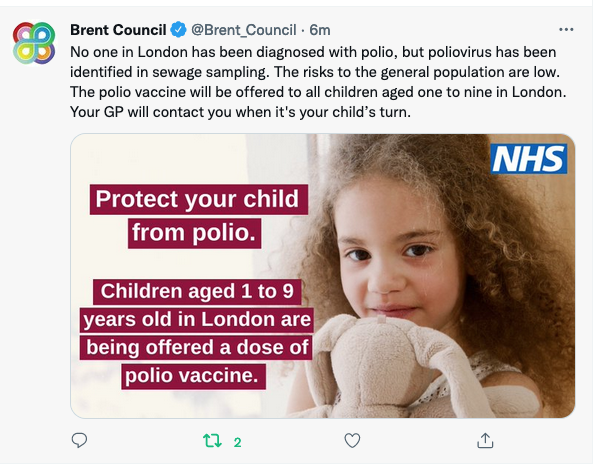 Tweet released by Brtent Council at 10.45am Thursday morning

The BBC is reporting that children aged one to nine are to be offered polio boosters after the virus was found in 116 places in London's waste water since February. Brent is named as one of the places it was found. LINK

Campaigners drawing attention to the amount of raw human sewage flowing in the Wealdstone Brook had raised the public health danger with Brent Council and asked for the declaration of a public health emergency.  See John Poole's letter HERE.

Yesterday – Wednesday 22nd June 2022 – the area around Beckton Sewage Works in NE London has been declared a ‘Major Incident’ because the Polio virus has been detected in the local river water. LINK

Raw sewage in the Woodcock Park section of the Wealdstone Brook persisted through to May.

If it turns out that water samples were also taken from the Wealdstone Brook (and they should have been given the information now released from the Environment Agency as of yesterday) then Brent Council were negligent to say the least in not declaring the human sewage pollution of the Wealdstone Brook a ‘Major Incident’ as requested by me.

If there were no medical tests of the water for such viruses, then I would regard that a major dereliction of duty from Brent and Harrow Council and the local medical authorities, particularly since we had a zoom meeting with a health official in the Brent and Harrow area regarding just this issue. The water of the Brook was not only chemically toxic and dangerous to human health – it would also certainly contain some potentially very serious viruses and was therefore biologically toxic.

How dare they play games with our health let alone the health of children who continued to play in and around this river as it runs through Woodcock Park and no action was taken by the authorities to fence off this river in spite of repeated requests on health and safety grounds from the Friends of Woodcock Park.

I am angry, very angry – ignorance is no excuse for the failure to protect the health of residents of Kenton, particularly those that live close to the Wealdstone Brook.

Campaigners said that that the brook flowed close to a primary and a secondary school  as well as through Woodcock Park and that children playing could go into its waters to retrieve balls or  while playing.

The risk to the general public from polio is low and remains low if you're up-to-date with your vaccinations. The polio vaccine has been tried and tested over many years and is safe and effective. The NHS is offering all London children aged one to nine a booster, so do take the opportunity to ensure you keep your children protected.

It’s a public health concern that the polio virus has been found in sewage. However, I’m pleased that the NHS has acted quickly and is offering children aged 1-9 an urgent booster vaccination to protect them from serious illness.

This reply from Dr Melanie Smith is unacceptable. It is not a question of low risk but of no risk. And one of the ways to establish a no-risk approach is to seal off as best as possible access to waterways in Brent where these have been tested and evidence of the polio virus has been detected.

The UK Health Security Agency declared a ‘Major Incident’ with regards to the detection of the polio virus in waterways in 6 London Boroughs associated with Beckton Sewage Works in East London. Under pressure and threats from me, the UKHSA has now named those 6 Boroughs and Brent has been added to the list. Brent is therefore now included in the ‘Major Incident’ which is ongoing according to an email to me from Scott at the Press Office of the UKHSA dated 19th July 2022.  There are two vital issues here;

1.    Which agency carried out the testing of the river waters in Brent? Which waterways were found to contain the polio virus? And is this information publicly available? If not, then I will apply under the Freedom of Information Act for a set of the results.

2.    What action is Brent Council now taking, in view of the fact that Brent is now included in the UKHSA ‘Major Incident’, to publicise the dangers of the waterways in Brent ?

Thank you for this informative article. Vaccine boosters essential for all children.

Isn’t that fat rather than sewage?

The guidance that Councils received and insistence from Thames Water left them with a lack of strong grounds to declare an emergency. Higher up should have supported the two Councils and tested the water for Polio sooner (if they had not yet done so-with the NON LIVE vaccine). The Risk increases considerably if there is patchy vaccine uptake in early years....Live vaccine: Not now used in UK due to lower Polio risk. The person vaccinated can pass the live potentially seriously damaging polio virus on to those not fully vaccinated (similar to full blown virus with risk of paralysis and long term loss of limb usage).

A lady who lived on my street in Kingsbury used to struggle courageously to walk slowly to the shops, bent almost double. She refused any offers of help, saying that if she could not do things for herself, she might just as well be dead.

When I got to know her better, she explained that she had been "crippled" (her word) for most of her life. She had caught polio when a teenager, in the early 1950s. She'd spent weeks in hospital, in a machine called an iron lung, which helped her to breathe when polio had attacked her lungs.Though the new NHS had saved her life, the damage to her body that polio caused lasted for the rest of that life.

Polio is a very serious illness. Parents should get their 1-9 year olds a polio booster jab as soon as possible.

But Brent Council should work with Thames Water and the Environment Agency to get the Wealdstone Brook and River Brent cleaned up even sooner!

We need to call for the Wealdstone Brook to be tested for Polio both here and in Harrow.

The boroughs mentioned could be the tip of the iceberg.

Lidding Road proposed development site is an unsuitable site for building right next to the Wealdstone Brook - above a drainage system that requires the flats to be built on stilts with flood evacuation plan....!

No Comment from the Brent Cabinet member for Health etc! Has Cllr Nerva gone on holiday with Kieth or Boris?