Islamia Primary School parents presented a petition opposing the move of the school to the Strathcona site in Kingsbury at today's Cabinet meeting.  Public space in the meeting room was limited but 15 or so parent supporters squeezed in to back up Jamad Guled as she spoke to the petition:

The Yusuf Islam Foundation has issued  Islamia Primary school with an eviction notice. For the past couple of years Brent Council and Islamia's  governing body have been in talks in regard to moving the school to South Kenton which is over 6 miles away from Queen's Park.

Last June the Governing body  informed parents that  the decision was made  to move and  it was just being finalised. No mention of a consultation.

Panicked parents had to write to the council and were reassured  no decision was made yet and the school had a statutory duty to consult parents.

Unfortunately, this attempt to mislead the parents created a lot of unnecessary  confusion,  frustration and mistrust.

This petition was signed by 509 stakeholders, this undeniably demonstrates that the local community is against such move and worried about the future.

1) affordability especially since we are in the midst of a cost of living crisis ( low income families, single parent households and those with work and caring responsibilities will be left behind)

2)accessibility ( how will children with mobility problems,  children with sensory difficulties  or families with multiple young children travel safely  to a location with no viable parking facilities nor lifts)  they will be left behind as well.

3) higher population density ( how will local residents cope with increased traffic and people?

4) the environmental impact of  increased number of vehicles driving from different locations and accessing a small area like the Strathcona site.

5)safety concerns when hundreds of young children will  have to travel to a school  located in an industrial area near a car repair centre,and will also be accessing busy train station platforms every day at peak times.

Parents demand that  an equality and impact assessment is carried  out to protect the most vulnerable families.

We must bear in mind that some families, no matter the sacrifice required will choose to travel. How is the council going to protect and support those families?

Others will choose to home-school.

This will make monitoring children's attainment and safety difficult and put further pressure on services required to monitor  and safeguard children.

This representation  is an opportunity to voice our anguish and worry as parents.  It aims to shed a light on the blatant discrimination this decision will enable.

It is our hope that this will be an opportunity to rise above the mighty  power afforded to some  VA schools which make it extremely hard for parents to be heard, to enforce  accountability and demand transparency.

The truth  is, we are where we are because many opportunities were missed  over the years. Should the children be the scapegoats for those?

We are calling upon the council to finally  listen and act in the best interest of Islamia's children.

We are tired of being permanently in limbo and kept in the dark.

Everyone here knows that Strathcona is not a fair nor safe solution and should have never been an option made available to  Islamia's Governing body. If the governing body cannot uphold its duty of care, then the council must  step in, and safeguard children's futures by withdrawing this inadequate offer and  find a local solution.In the second part of my petition l have discussed the option of the new school being built in South Kilburn.

I firmly believe this is the best  solution. The council has a duty to use taxpayers where needed most.

Carlton Vale and Kilburn Park have been struggling with numbers for years and cannot fill the new  2FE school being built. They  currently have respectively 77 and 76 children on roll. For a capacity of 230 and 240.

2022’s national census predicts a further decline in birth rates  therefore there  will be no shortage of primary schools places in the foreseeable future. So the council cannot invoke pressing needs.

Government data shows that schools in the area are all operating well below capacity and can easily accommodate children from Carlton Vale and Kilburn Park when their school is demolished.

Islamia's children  will not be afforded the same consideration whether the school moves or shuts down  and some children will have to join neighbouring schools.

Islamia's children will lose the faith element In their education .And faith matters.

How can the council justify earmarking the new school for two empty schools when an oversubscribed and popular  one is at risk of shutting down? Who will safeguard Islamia's  children travelling 6 miles for compulsory education?

Let us not forget that Islamia is a Brent school.

Sofia Moussaoui, Chair of Governors at Islamia, also spoke.  She said that she had seen the petition and the Governing Board would consider if the proposal for South Kilburn was viable but the Council had said the site was not available. Anyway it  would not have been available for 4 years and the school had only 2 years  in which to find an alternative site.  The school had been under pressure in terms of space, occupying a split site that was supposed to be temporary, but they had been there for 14 years.

She said, 'Ideally  we will take parents with us.  We will look into how to get them there. The main thing is to get families behind us.'

Cllr Grahl, Cabinet Lead for Schools,  said that she recognised that the Council had invested in other sites but unfortunately South Kilburn was tied up as part of a development. Eviction had come at a time when no other sites were available in Queens Park.  An effort had gone into the Strathcona project and the Council will work to ensure a smooth transition for parents and children. The consultation would enable parents to contribute and the Council will look at how to facilitate access particularly for children with special needs.

Cllr Butt added that the petitioners will be able to have a say through the consultation. The main issue is to secure the futuure of the school working with the Governing Board and the Trust. He personally had been out to look for alternative sites and Strathcona was the only one that can be developed as a permanent site.

Perplexingly no questions were asked about why the Yusuf Islam Foundation had evicted the voluntary aided primary school while the private secondary schools remained. No reasons were given in the Cabinet papers and neither Yusuf Islam (Cat Stevens) or the Foundation have replied to the question, 'Why the eviction notice ?' sent on Twitter, Facebook and email. 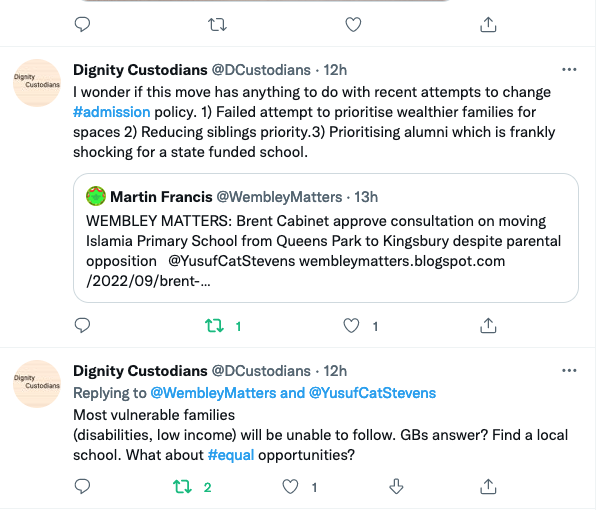 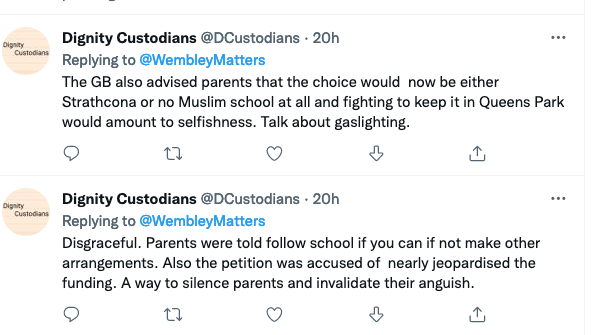 The report that clears the way for a formal consultation on the move was approved by Cabinet.

What sort of consultation will it be? Not about whether the school should be moved to the Strathcona site - looks like that is a done deal!!!

Quite unbelievable decision until one is reminded that this is a Brent Council decision.

Although the school is based in Brent which other boroughs do the children come from? By the way, the post says that the school is to be moved to Kingsbury, Strathcona site, which is to be converted into a 2FE at £10m cost, is in Preston Ward, Wembley. There are 3 other primary schools within half a mile and already causing congestion!

Families will travel there because it is the only VA Muslim school in the borough. It will get pretty hellish for the residents me thinks.

Only £10,000,000 more added to the London Borough of Bent's astronimical borrowing portfolio.

It strike me that a lot of parents who use the current school won't go to the new one as it is so far away. So are Brent Council, on the word of a couple of unworldly Brent Councillors, going to borrow another £10 million to refurbish a school we don't/won't need. What a waste of our money, this is being decided without knowing the likely take up.

They need to be investigated for building a new school to replace two empty ones in an area packed with primary schools nome of them full. Just to glorify the regeneration in SK. And they will not give the site to an oversubscribed school being evicted. Thats taxpayers money thrown out of the window.

Shocking. The Preston ward councillors said NOTHING about this prior to election in May. What a bunch of liars

Carlton Avenue East and Windermere Avenue are jammed packed during school opening and closing times, it’s also a bus route and large lorries going to and from the industrial estate also use it. South Kenton station has lots of stairs, as has Queens Park.

This has not been thought through at all.

The new school doesn’t have to be in Brent. JFS moved from Camden to Brent, so if necessary Islamia could find a home in a nearby borough.