‘Systemic discrimination can be described as patterns of behaviour, procedures, routines, policies or practices that are part of the structures of an organization (Brent Council) and contributes to less favourable outcomes for minority groups (Newland Court Residents). Behaviours may include dismissive or derogatory comments, gossip, ignoring others, judgemental attitudes, isolating others, laying blame, lack of respect, labelling, intimidation, name calling, bullying, and physical altercations.’ 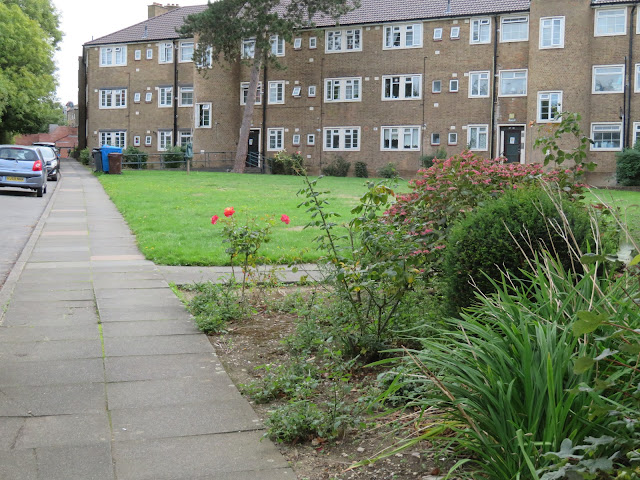 Brent Council have shown nothing but Systemic discrimination towards the residents of Newland Court over their proposed ‘infill’ plans of building 7 TINY town houses by demolishing the garages at Newland Court. They have shown no empathy been dismissive and ignored our thoughts and feelings to go ahead with this ‘infill’ contributing to a less favourable outcome for the residents (especially the elderly and disabled) of Newland Court who they are treating like a nobodies or a minority group.

These new 7 TINY town houses are so tiny that the width of the first unit is around 3.3 metres. The other units are between 5.8 and 6.2 metres in width and are going to be 3 and 4 bed roomed houses. These tiny houses are going to have their own gated security and their own bin and cycle storage with a front and back fore-court all within each unit. And Brent wants to reduce our urban green space and build a new playground for these new residents after all these years of ignoring our children’s needs for a play area. Our children are now adults.

For years we have asked for:-

1)     New security gates installed at both entrances for the safety of residents, to stop drug pushers, drug users and to stop fly tipping.

2)   Proper security lighting and cameras installed for the safety of residents.

3)   Not reduced parking spaces but more made with at least 4 disabled parking bays.

4)   Bins situated away from the flats because of the stench. (The bins have never been jet cleaned or disinfected and more bins not less to service 60 flats.

5)    Drainage sorted out because water accumulates when it rains heavily at the entrance of Newland Court.

We all know that there is a chronic shortage of social housing and the truth is, there always will be because the councils let it happen. Brent Council’s favourite slogan as an excuse is always ‘there’s a chronic shortage of affordable housing’ yet Brent Council are building 250 "New Council Homes" on the former Copland School site at Cecil Avenue in Wembley. They have had full planning permission for this scheme since February 2021, although it will probably be early 2023 before work begins (so much for the 'urgent need' for new homes that they talk about).


And guess what? 152 of these new homes at Cecil Avenue, on land Brent Council already owns, will be for Brent's "developer partner" to sell privately, for profit. But under the proposals for Cecil Avenue, approved by Cabinet on 16 August, only 37 of the 250 homes will be for London Affordable Rent, and none will be for Social Rent (which the Brent Poverty Commission Report in 2020 said should be the Council’s priority for genuinely affordable homes). That is why Brent Council needs to squeeze 7 new TINY homes on the Newland Court estate, and other such Council "infill" schemes.

Brent Council have known for years that the roofs of these garages that they want to replace with the 7 houses have asbestos but have deliberately let them run down and have done nothing about it. A few years ago an elderly disabled resident who still parks her car in one of these garages contracted lung cancer, believes she got it from the asbestos but can’t prove it. She only has one lung now. What measures are going to put in place to ensure the safe removal of the asbestos and the safety of the current residents? Probably none as the residents are just nobodies, a minority group to Brent Council. 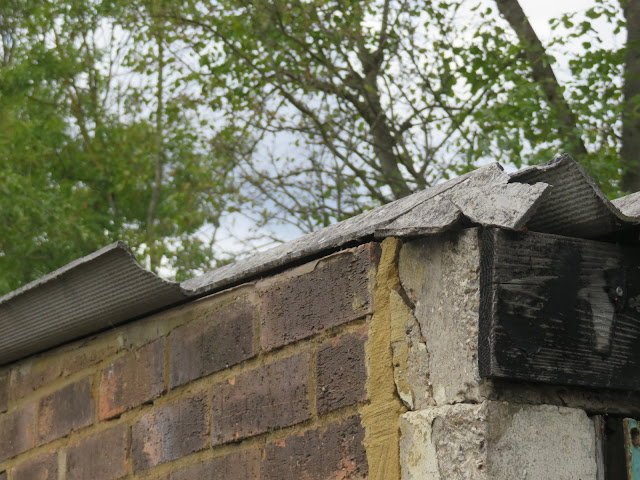 Three councillors, their architect and other team members met with residents living at Newland Court as part of the pre-planning stage of this development. This enabled residents to directly feed into the design of privacy, parking and trees. It was a waste of time and just a pen pushing procedure just to say that they had consulted with us.

They said no trees would be removed during the site meeting. LIES!! In the final plans they are removing 13 trees from our view which were specifically positioned where they are many years ago to make a screen between Newland C0urt and the gardens of the residents of Grendon Gardens. They prevent overlooking between Newland Court and the residents gardens of Grendon Garden.

These trees which are a mix of sycamore, lime and ash were designed to make a pleasant landscape and form part of our URBAN GREENERY and are therapeutic to residents, especially those who can’t get out much as it helps their mental wellbeing and reduces depression and anxiety. They are homes to robins, magpies, parquets and even the occasional bats that have been sighted by keen residential bird watchers. Birds have their nests in these trees and the different chirping and tweeting sounds that they make will be greatly missed if these trees are removed.

Some of the landscaped trees to be removed

We spoke about the need to retain our parking spaces, being reduced from (around 40 down to 12) as we have at least 5 residents who are disabled badge holders, several cab and delivery drivers and other self-employed car users. They haven’t even factored any disabled parking bays in their new plans and to drive us into despair they intend to introduce pay and display all around the streets by Newland Court because of the impact of the overflow this will cause. Instead Brent Council are now trying to imply that parking along Newland Court is not designated for car parking (even though we’ve parked there for years) as there are no formal demarcated parking bays.

Loads of estates don't all have designated parking bays but have controlled parking with signage stating valid permit holders only just like Newland Court has. I have lived at Newland Court since 1988 and about 15 or so years ago Brent introduced parking restrictions and charged us £10 for permits and another £10 to have a visitors permit. Earlier this year we received letters from Wing Parking saying that we wouldn't be charged anymore for our permits. We still had to have them displayed or we would be ticketed. We all wondered why?? But guess what??? We were still all clueless about this proposal and now we know why.

They are actually reducing our residual waste bins from 14 to 6 and taking some of our urban green space to make way for the limited 12 car spaces they intend to leave us with and create a playground for the new residents. Not only is it unfair to have our residual waste reduced from 14 to 6 as the 14 we have is not enough for the current residents but we want them away from our urban green space so that the residents and visitors do not have to endure the stench every time we enter our flats. When emptied they stink and have never been jet washed or disinfected.

The 10 metre overlooking rule is actually around 8 metres at one point and around 9 metres at another even though Brent’s planning guidance recommends 18 metres for overlooking. Do you know how imposing and close the proximity of having buildings only 8-9 metres that close will feel like? So as you can see, there are lots of flaws in their plans apart from them ignoring a lot of their own Brent planning guidance. Brent Council DO NOT care about their residents’ interest. Brent Council have shown nothing but Systemic discrimination towards the current residents of Newland Court.

100% agree. Spelling out the truth. Will anyone in planning take notice and make changes to this outrageous scheme, and consider the long time residents as a priority.

Existing council tenants /residents appear to be exempted from planning policy intended to protect them. It needs to be tested but that is difficult as residents are discouraged from organising into resident's groups and having a voice

Marc's letter rightly calls out the hypocrisy of Brent Council's plans to allow a "developer partner" to sell 152 of the 250 homes, on a Brent housing development on Council-owned land at Cecil Avenue, for profit, while insisting that it has to use "infill" sites on Council-owned estates to provide the affordable homes that Brent residents need.

I have been highlighting this "giveaway" of Council homes since August 2021, in a series of articles on "Wembley Matters", in questions to Cabinet members and in my attempts to get Brent Scrutiny Committees to get a proper explanation of "Why?" from those in power.

Marc raised this point in his supplementary question to Cllr Promise Knight, Lead Member for Housing, at the Full Council meeting last week, and she ignored it when giving her "response" to what he had publicly asked her!

for what reason does council owned land go to decelooers. It doesn’t make sense. What happened at willesden library was a con too with money taken from us

Although Brent Council gave away 70% of the Willesden Green Library site to a private "developer partner", in return for them building a new "cultural centre" for the Council "for free", that is not what is proposed for the former Copland School site at Cecil Avenue.

Here the Council will retain ownership of all the land, but a long lease on 152 of the 250 homes that Brent have planning permission to build on the site will be sold to the "developer partner" as part of the contract under which that partner builds the homes (and is paid to do so).

But it is a "con", unless Cabinet members and Senior Officers can explain publicly why they are doing this deal, when those 152 homes, including 20 family-sized homes, could have been used to house the Brent people in need of affordable rented homes. They have so far avoided being "held to account" over that decision.

And only 37 of the 98 Cecil Avenue homes that the Council plans to retain will be genuinely affordable (if London Affordable Rent can still be called that)!

Growth 1; many of those who engage with Wembley Matters over the last 12 years seem none too happy with absolutist exclusionary growth, what I term colonial growth zones. Colonial growth focuses on council estates with their un-registered land uses and also the Wembley Park Towers model of bit-by-bit expansively eating into neighbourhoods all around at weakest points.

Brent has been a main UK pathfinder for these Government-led zoned exclusionary growth colonial techniques since 2010. Now with Governments Growth 2 Plan September 2022 proposing expanding this market decides all of experimental zones to many more UK communities to become zones, maybe Brent's zones could finally be the first to join-up the dots and propose major mitigations and compensations for having been zoned out of social democracy and to population density appropriate scale public services investments since 2010?