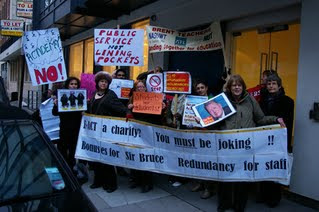 Staff at Crest Girls Academy in Brent were shocked to hear that 21 staff redundancies were being proposed. At an emergency joint unions meeting last Thursday, 79 staff (with 3 against) voted for strike action in the event that the current "business plan", which basically means the redundancy of 21 staff members, goes ahead.

Crest Girls is run by the academy group E-ACT and last year Crest Boys took successful strike action to prevent any compulsory redundancies at their academy.

A group from Crest Girls joined by other anti academy campaigners and ATL, NASUWT and NUT union officers from Redbridge who face E-ACT academies there, had a demonstration outside E-ACT's HQ in London. E-ACT were left in no doubt the strength of feeling felt at Crest Girls and particularly in the circumstances where their Director General (!) Sir Bruce Liddington earns over £265,000 plus bonuses per year.

It is unfortunate that there has been an increase in the redundancies over the past couple of months, but as long as people know their redundancy rights they should be able to get through it swiftly to move on and look for other options