Brent objected at the time of the Brent Cross planning inquiry, but Barnet Council played down the scale of Brent's objections. A promise made since by Barnet, to jointly consider increased traffic congestion on the A5 Edgware Road, has not changed Brent's position.
Brent also insists that road changes around Staples Corner:

"should not prejudice future opportunities to provide light rail, or other fixed link, to the [Brent Cross area].”

This follows Brent Council’s endorsement of a future North and West London Light Railway (NWLLR) project at a full Council meeting on 24 January.
Brent Council, Harrow Council and Ealing Council  have all now voted unanimously, to support in principle the "North and West London Light Railway" as one of several solutions for an orbital railway line across outer London.
John Cox, BXC Coalition member and transport campaigner says,

“Brent Council is right to reaffirm its concerns about the Brent Cross transport figures, and the resulting road congestion we will all suffer. It was due to questions that the "Brent Cross Coalition" raised about Barnet Council's figure of over twenty-nine thousand extra cars a day (including at West Hendon) that led Barnet to magically revise this figure down. After five years of the high figure, It now states a more "politically acceptable" nine thousand cars, somehow managing to lose twenty thousand.
"Barnet has misrepresented the numbers by assuming car journeys would account for one third rather than two-thirds of trips. Brent also recognises that the transport assessment needs to be revised again in view of other new plans, such as the Wembley regeneration. However, the desire for extra money from the Brent Cross developers has completely stopped the council from representing the public interest.
“In common with Brent Council, we just don’t believe these dubious figures. Barnet and the developers need to go back to the drawing board. We know the real impact their car-based scheme will have on congestion and air pollution in Barnet, Brent and the surrounding areas.”

“Alongside many local residents, councillors from all parties have been campaigning against this damaging development and the impact it will have on us. I am pleased that Brent Council planning and transport department are yet again pointing out major concerns about the severe congestion that the Brent Cross development will bring.
"I am dubious about the quality of the 'A5 Corridor Study' that Barnet is now trying to palm us off with. It is not going to reduce the car levels from Brent Cross one bit. 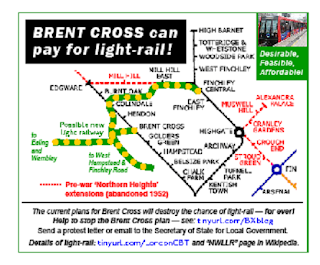 “I am also delighted that all political parties at Brent Council are supporting proposals for a North and West London Light Railway – a sustainable public transport project that will go a long way to ease the gridlock and provide alternative routes right across north and west London."

There are campaigners in Barnet who want to extend such a light-rail line across Barnet, via Colindale and Mill Hill East, to benefit even more people. The Coalition believes that the car-based developments at Brent Cross (costing £4.5 Billion) , Colindale (£1.5 billion) and elsewhere could pay for it, if only the political will is there.
COALITION FOR A SUSTAINABLE BRENT CROSS CRICKLEWOOD DEVELOPMENT WEBSITE  HERE
Posted by Martin Francis at 16:45:00