6pm - all appears quiet in Wembley

Having heard this afternoon that there were rumours that Wembley would 'kick off' evening I had a stroll around to assess the atmosphere. If anything Wembley High Road was a little less busy that usual with fewer young people  around but there were half a dozen or so pairs and sometimes trios of police officers spread along the street and in Central Square. However people seemed calm and there was the usual commuter traffic at Wembley Central station and on the bus routes and the regular al fresco drinkers in the square seemed relaxed enough.


A number of shops were shuttered (although it needs a good local eye like mine to know which ones shut early or are closed for good, rather than closed as a precaution!)  TK Max , Wilkinson and Tesco had closed early but the pubs and most of the fast food joints, including McDonalds and KFC, remained open.

A policeman told me that although things appeared calm on the surface they were keeping their eyes on several small groups of youth in case they came together. He confirmed that shops had closed early in case of trouble later today. 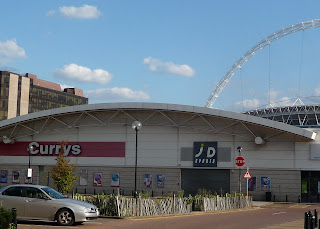 There were no police that I could see in Wembley Park but Currys and JD Sports in the Stadium Retail Park which have proved popular in 'consumerist rioting' were closed and shuttered and some of the bars were open but with doors and windows boarded up. ASDA remained open and busy. Tesco at Wembley City was closed. Wembley Park station and Wembley Stadium station were both operating normally.